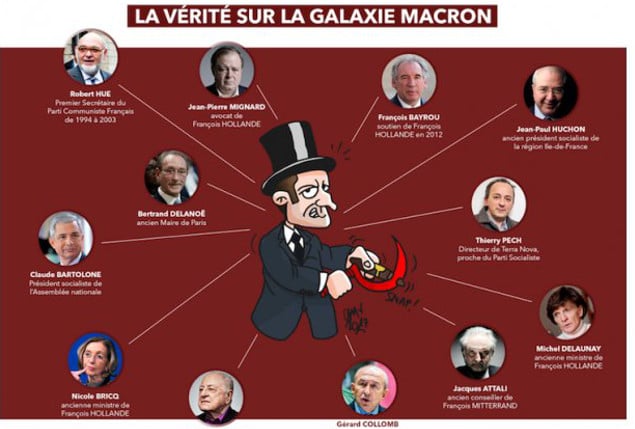 The image showing the centrist Macron, a former economy minister and investment banker, with a hooked nose, wearing a suit and top hat, was tweeted from the Republicans party account on Friday.

Francois Fillon, the Republicans candidate and one of Macron's main rivals in the race for the Elysee Palace, on Saturday condemned the image as “unacceptable”.

He said he could not “tolerate the party spreading caricatures that use the codes of anti-Semitic propaganda”.

The offending tweet was deleted after several hours, and the Republicans issued an apology.

Macron, whose campaign has gathered momentum as Fillon's has become embroiled in scandal, said the French expected better from their politicians.

“It starts with booing the press in public meetings and ends with people resorting to anti-Semitic imagery to attack their opponents,” he told La Croix newspaper.

“All of this contributes to the debasement of public life.”

With six weeks to go before the first round of the presidential election, former prime minister Fillon is battling allegations he used public money to pay his wife and children for “fake jobs”.

The 39-year-old Macron is riding high, with one poll on Thursday suggesting he would finish ahead of far-right leader Marine Le Pen in the first round of voting.

With no candidate likely to win an outright majority in the first round, a run-off between the two top candidates will be held on May 7.