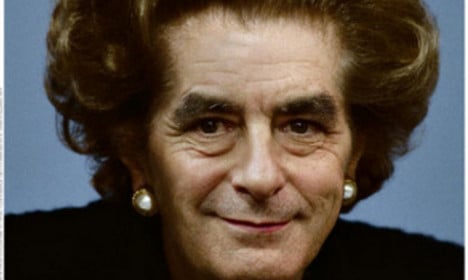 With high unemployment, the economy in the doldrums and hardline unions organising street protests and strikes in a bid to derail labour reforms, perhaps it’s not really a surprise France in 2016 is often compared to the UK in 1979.

Or at least that was the point made in a recent edition of right-leaning Le Point magazine under its cover headline: “Thatcher – the best programme for 2017”. That was before Thatcherite François Fillon upset the odds to become the rightwing presidential candidate.

Although polls show Fillon's campaign has been derailed by the Penelopegate fake jobs scandal and he is currently unlikely to make the crucial second round run-off vote, no one should rule him out.

On Monday he reaffirmed his plan to spark the French economy into life promising a complete “rupture”.

A fan of free-market economics and a small state, Fillon is promising to do what Thatcher did to the UK in the 1980s and “tear down the house to properly rebuild it.”

As part of his renovation plan he wants to extend the retirement age to 69, end the 35-hour week, get rid of half a million posts in the civil service, scrap most of France’s labour laws, make €40 billion of tax cuts for businesses and make €100 billion savings in state spending. And he wants to slash the power of the trade unions.

It’s the kind of short sharp painful shock or “total rupture” that Thatcher imposed on the UK despite violent opposition from unions.

“She is the symbol of an inflexible political determination to stop a situation of decline,” Fillon has said. But is it what France needs in 2017?

“This is absolutely necessary if our country is to become attractive again,” read a statement from French business organisation METI.

They also  have longstanding gripes with France’s rigid labour laws which they argue are overly protective of workers at the expense of businesses.

Business leaders in France were infuriated when the Socialist government watered down labour reforms after the hardline CGT union launched nationwide protests and prompted fuel crisis.

Economist Tomasz Michalski from HEC business school in Paris has argued here that huge state spending, massive debt, the bulging sector, lack of product competition, monopolisation and a two tie labour system (Permanent CDI contracts versus temporary CDD ones) are reasons why France is ripe for a dose of Thatcherism. But while France clearly has its problems there are those, not least Fillon’s opponents on the left and far right, who argue the medicine he prescribes for France has long passed its use-by date.

“Fillon is Thatcher but 30 years too late,” said the National Front deputy leader Florian Philippot, who called Fillon “the candidate of wild globalisation”.

Philippot and the National Front are hoping to be the next to cash in the anti-free market, anti-globalisation sentiment that is considered to have led to Donald Trump’s election and persuaded many in the UK to blame Europe for their ills.

Rapid de-industrialisation and high unemployment among forgotten working class communities plus a dramatic rise in inequality were all cited as reasons for Trump’s election and Brexit.

The conclusion made by many was that the Thatcherite liberal policies of the 1980s were finally shown to have been flawed so why would they work in France, where the same inequalities are on the rise, even if less marked.

“Thirty years later we realise the economic success of the policies helped just ten percent of the population and most others saw their situation stagnate or worsen,” French economist Xavier Timbeau from the French Economic Observatory (OFCE) told The Local.

“France must learn from that,” says Timbeau, who says imposing another conservative revolution in France could lead to “disaster”.

It may also lead to a Marine Le Pen government further down the line.

“If Fillon is really like Thatcher then it will really work to the advantage of Marine Le Pen in the 2022 election,” said Timbeau.

Fellow economist Henry Sterdyniak, also from the OFCE told The Local: “The risk is that [Fillon’s planned reforms] will just reduce wages and the worsen the situation for workers.”

“France must instead try and sell its own model, which is more equal.”

“Even if it didn’t work for the working classes in the UK or the US, or even in Germany where poverty levels increased, the French are not really aware of it,” he said.

“Workers have been persuaded by business groups in France that the French social model is to blame. They will probably have to go through the same experience as the UK and US. And that’s what is tragic.”

If Fillon imposes his shock remedy, we can expect “six months of war” on the streets, the economist predicts.