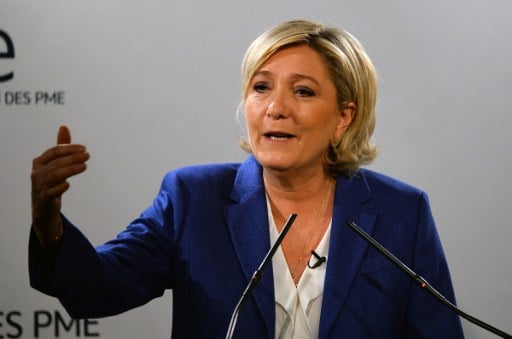 Photo: Eric Piermont/AFP
Analyzing possible outcomes in the Dutch, French and German elections as well as Britain's triggering of Article 50 to kick-start Brexit and Greece's debt negotiations, Credit Suisse strategists offered three scenarios for Europe's immediate future.
Scenario one, billed as “positive” by Switzerland's number two bank, sees pro-European, centrist candidates winning in France and Germany when the key continental powers vote in April and September, respectively.
This scenario also envisages a “benign outcome” empowering a stable coalition in next week's Dutch vote, with anti-establishment and anti-Islam politician Geert Wilders' Freedom Party currently slumping in the polls.
The “central scenario” sees the Greek bailout negotiations “drag on” through the summer without definitive resolution and struggles in the Dutch parliament to form a coalition.
In this scenario, France's centrist and upstart candidate Emmanuel Macron wins the country's presidential election but has trouble carving out a governing mandate.
The “negative” option has Greece struggle for more debt funding and anti-immigration nationalist Le Pen of the National Front elected president of France.
“Credit Suisse strategists take the view that the French presidential election… poses the most important risk for Europe this year,” the bank said in a statement, referring to the April 23rd vote, with a second round set for May 7th if needed.
“Any narrowing of the polls in Le Pen's favour will create a high degree of volatility in the markets,” it added.
Credit Suisse said it will update its “Risk Barometer” regularly to reflect levels of systemic risk in European bond and equity markets.
Overall, the bank considers it “unlikely” that any country will leave the eurozone but warned that “institutional safeguards against a euro break-up remain incomplete.”