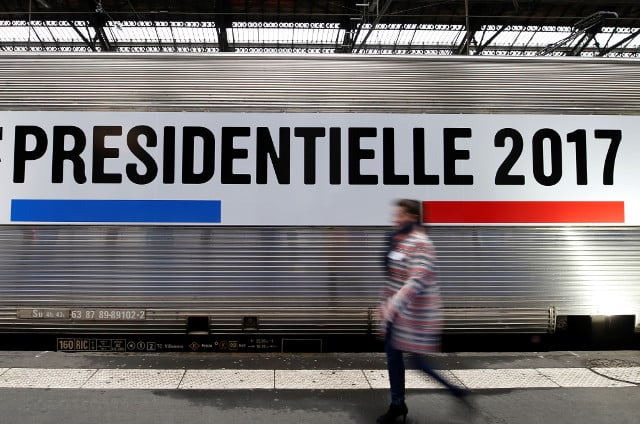 You might think the scrap for the French presidency, with all its scandals and mud-slinging is a total free-for-all, but there are a surprising number of strict rules that need to be followed in the race for the Elysée.

Let's start with the basics:

In order to vote in the election, you just need to be over the age of 18, a French citizen and in possession of your civil and political rights (certain prisoners in France aren't allowed to vote, as an additional penalty for their crime).

Unlike Australia or Brazil, turning up to vote isn't obligatory in France. French people had to have signed up to the electoral register by January 1st 2017, but exceptions are made for those who turn 18 or receive French nationality, retire from civil service or return from military deployment after the deadline.

French living abroad can also vote, but fear of interference means voting electronically is no longer an option.

Who can be a candidate?

Anyone can become a presidential candidate providing they can get 500 signatures of support from elected officials in a three-week period that ends on March 17th in 2017.

The signatures must be spread across at least 30 different departments, with no more than 50 signatures per department.

Now the official rules start to get a bit more complicated – this is France after all. How much are candidates allowed to spend in their campaign?

During the first “official” campaign period, which begins on April 10th in 2017, candidates pull out all the stops to win over voters before the first round of voting.

However, there are limits to how extravagant candidates can make their campaigns.

To help even out the playing field a little between bigger and smaller parties, campaign expenses can't legally go over a certain threshold, €16.8 million for the first round, and €22.5 million for the second round.

Where do they get that kind of money from?

In the spirit of equalizing candidates' chances, and minimizing the influence of donors, candidates are reimbursed for certain campaign costs.

Those who manage to grab more than 5% of the vote in the first round are reimbursed 47.5% of their campaign spend, while those who don't make the 5% vote threshold see 4.75% of their money back.

But that doesn't mean French candidates are free to blow their budget on a cushy campaign limousine. The state only reimburses costs for certain parts of the campaign; the TV and radio campaign, printing costs, as well as putting up posters in official places. (Nicolas Sarkozy got into trouble for overspending during his 2012 election campaign. Photo: AFP)

What about private donors?

Yes, most of a candidate's campaign will usually be funded privately, though individuals are only allowed to donate €4,600 euros per person. Any donation over €150 has to be given either via cheque, bank transfer or standing order to the candidate’s official campaign account too. So no slipping candidates a wad of cash with a nod and a wink, we hope.

Are there any rules on how to campaign?

French candidates are allowed to print posters, hold rallies and such, but they're not allowed to run the kind of TV ad campaigns you might see in the US and other countries.

Each candidate is allowed a small number of “statements” during the five-week official campaign period, which have to follow certain rules on editing and time.

In previous elections, a law of strict equality for the airtime given to each candidate was enforced, however as of April 2016,  things have changed a little.

Now, in the period between the list of candidates being published and the official campaign beginning, candidates are given “equitable” airtime, meaning their on-air minutes are dictated by their score in the last election and poll ratings.

But as soon as the official campaign launches on April 10th the rules on completely equal airtime on TV and radio come into play like before the reform.

That means that as long as she gets her 500 signatures, Nathalie Arnaud, leader of little-known Lutte Ouvrier (Worker's struggle) party would get to speak for the same length of time as front runners like Francois Fillon or Emmanuel Macron during the official campaign period.

French media outlets will also be in big trouble if they reveal the winner before 8pm on results day, even though journalists usually know who it's going to be by 7pm.

What about opinion polls?

The rules on polling have changed this year too, any electoral poll now has to mention what proportion of people didn’t answer, and provide information on how to get the raw results.

As always, it’s forbidden to publish, broadcast or comment on any polls concerning voting intentions the day before or the day of the vote.