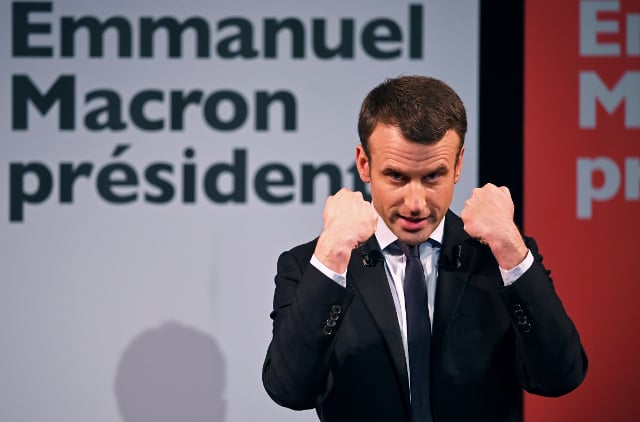 A new poll Thursday showed centrist candidate Emmanuel Macron for the first time beating the far right's Marine Le Pen in the initial round of the French presidential elections next month.

Macron's lead comes as a growing list of backers from both the left and the centre throw their support behind the 39-year-old former economy minister who is trying to upend France's traditional politics.

The Harris Interactive poll showed Macron taking 26 percent of the vote on April 23 — a six-point gain in two weeks — compared to 25 percent for National Front leader Le Pen, who had long been leading in the first round.

In the likely event that no one wins an outright majority, a run-off between the two top candidates will be held on May 7.

The Harris poll shows Macron would take 65 percent of that vote to Le Pen's 35 percent.

But the poll will be taken with a great deal of caution by Macron and his supporters.

For a start he has already shown that his popularity ratings can fall just as quickly and as dramatically as they can rise.

Last month Macron was riding high until he made controversial comments about France's colonisation of Algeria being a “crime against humanity” and the anti-gay marriage movement Manif pour Tous having been “humiliated” by François Hollande's decision to legalize gay marriage.

Macron immediately slumped in the polls and the spiral only stopped when centrist François Bayrou announced he was not going to run for president and would instead back the 39-year-old former banker.

Macron's unstable poll showings can be explained by the fact that while many voters have fallen under the spell of the man frequently labelled as a “maverick” or an “upstart” they are not yet totally convinced by him. His rise to the top has been swift but too quick for any loyalty to have laid its roots, unlike in the case of a seasoned politician like Le Pen

Separate polls this week showed that among all the candidates it was Macron whose voters were the least sure of their choice.

One Elabe poll for BFMTV showed that 79 percent of Marine Le Pen's voters were sure they would put her name in the ballot box come April 23rd, for François Fillon it was 73 percent, despite the fake jobs scandal, but Emmanuel Macron only 45 percent of those who will back him are sure of their decision.

That means for Macron anyway things can still go pear shaped if voters change their minds in the weeks to come.

Interesting poll. Only 45 percent of Macron voters are sure they will vote for him… https://t.co/QZgHjtCvB8

But it's hard to deny the momentum Macron is building up.

In a boost to his campaign on Wednesday, Macron won the backing of Socialist former Paris mayor Bertrand Delanoë who called him “a reformist, a European and a realist”.

Delanoë, who oversaw the French capital from 2001 to 2014, told France Inter radio he backed Macron because it was essential to “throw the most weight possible behind the candidate who can beat Madam Le Pen in the first round”.

There is also talk of several Socialist government ministers being ready to come out and support Macron rather than their party's own candidate Benoit Hamon.

This however maybe somewhat of a poisoned gift for Macron, who has tried to demonstrate he is “neither of the left nor the right”.

The backing by Socialists will give ammunition to those critics on the right who say he is simply the “heir” to François Hollande.

When we look at those elected officials who have officially sponsored Macron so he can get the 500 signatures needed to officially run for the presidency the vast majority have come from the left as the tweet below shows.

Macron may have to do more in the weeks to come to convince those on the centre right that he represents them too.