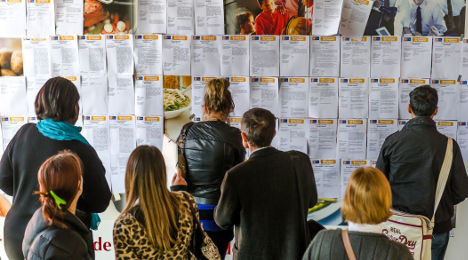 Figures from statistics office Insee suggest the next French president, set to take office after a two-stage election in April and May, will inherit an economy showing modest signs of recovery.

A total of 187,200 jobs were created in the non-farm private sector in 2016, the highest annual figure since 2007 before the global financial crisis slammed the world economy.

The most dynamic quarter of the year was the September-December period when 64,400 jobs were created.

Philippe Waechter, chief economist at Natixis, a French investment bank, said the rise was “in line with improving sentiment among business leaders who are anticipating an increase in activity.”

The French central bank raised its growth forecasts for this year on Thursday, saying it now expected the economy to expand by 1.3 percent from 1.1 percent in 2016.

This remains below the Socialist government's forecast of 1.5 percent, but is in line with many private forecasters and the OECD who have also been adjusting their outlook for France upwards.

The uptick in job creation comes too late for Socialist President Francois Hollande who decided in December not to stand for re-election after having failed to lower the unemployment rate of around 10 percent over his five-year term.

He staked his future on tax incentives for new positions and pro-market economic reforms, such as changes to France's rigid labour code, which he hoped would generate fresh employment.

“It's surprising that with growth so low we have managed to create so many jobs,” economist Mathieu Plane from the OFCE economic think tank at Sciences Po university in Paris observed.

French growth still lags the eurozone's as a whole, which is forecast by the European Central Bank to expand by 1.8 percent in 2017. Unemployment remains double the rate of that of Germany or Britain.

Polls show that jobs are the main concern for French voters, far more than immigration or security despite a string of attacks on France since 2015.

Independent centrist Emmanuel Macron, a 39-year-old former economy minister responsible for one of Hollande's main pro-market reforms, is currently the favourite to be the next president.

He faces competition from far-right leader Marine Le Pen, who is promising protectionism and to withdraw France from the European Union — a message popular with workers affected by factory closures.

Analysts urge caution about making firm forecasts, however, after an unpredictable campaign which has seen former rightwing frontrunner Francois Fillon ensnared in a fake job scandal involving his wife.

“It's the economy and social questions which are again the priority for French people,” he told AFP, before adding a warning: another attack would make security the top concern “in an instant”.