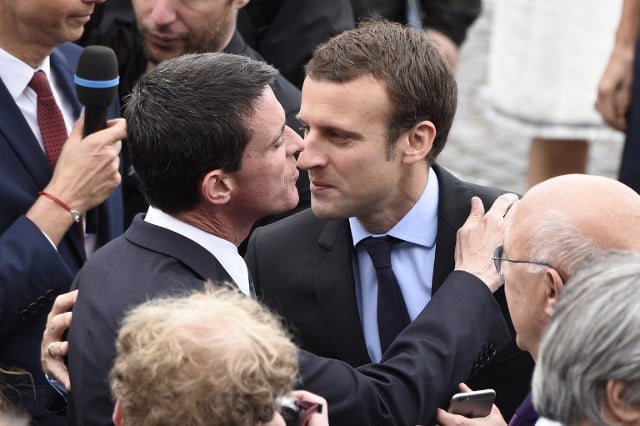 Will ex-PM Manuel Valls be the next Socialist to publicly back Macron. Photo: AFP

Centrist presidential candidate Emmanuel Macron told AFP in an interview Tuesday that he will be the defender
of France's middle classes, which he says have been ignored by left and right.

Macron, a 39-year-old former economy minister, has made swift progress in the campaign after founding his own political movement only in April last year.

On Wednesday he was boosted when the Socialist former mayor of Paris Bertrand Delanoë (photo below) pledged his support to Macron rather than his own party's candidate Benoit Hamon.

The former mayor of the French capital judged Macron's economic programme “credible” and “serious” but said Hamon's ideas, including a plan for universal basic income were “dangerous”.

There is much speculation talk of several Socialist government ministers, including ex-PM Manuel Valls, Segolene Royal and Jean-Yves Le Drian, the Ecology and Defence ministers, also jumping aboard Macron's ship. Even the Socialist president of the National Assembly Claude Bartolone said he “finds it difficult to recognise myself in Hamon's campaign.”

Bartolone said he needed two weeks to decide what to do. His fellow members on the right of the Socialist party may also decide to bide their time a little and see whether Macron really has a chance of winning before publicly backing Macron.

There is of course the argument that Macron might not be too grateful for the backing of ministers from a government that was deemed deeply unpopular. He is already criticsed by the right for being the “heir” of François Hollande.

The latest opinion polls suggest Macron is worth backing. He is now estimated to win 25.5 percent of the vote in the first round, meaning he is now neck and neck with Marine Le Pen on 26 percent. More importantly he has put distance between himself and the embattled François Fillon who has fallen to 19 percent.

Unlike Hamon, Macron is pitching his message to the centre ground, seeking to break the traditional left-right stranglehold on French politics.

Although veteran rightwinger Alain Juppe described him as “politically naive” this week, Macron's approach appears to have struck a chord.

Polls currently show the former investment banker would reach the second round of the election, where his opponent is forecast to be far-right leader Marine Le Pen.

The first round of voting takes place on April 23. If no candidate gets more than 50 percent of the vote, the top two go into a runoff on May 7.

Macron claimed that both the outgoing Socialist government under President Francois Hollande — in which he served — and their rightwing opponents have let down the middle classes, failing to feel their pain of job cuts and their increasing tax burden. “The contract with the middle classes, which are both the political and economic bedrock of our democracy, has been broken,” Macron said.

“They have forgotten the middle classes which are working for France, the France that is fighting to succeed.”

Macron told AFP that snubbing middle earners had been the spark which led to Britain's Brexit vote and Donald Trump's victory in the United States.

Macron suffered a blow to his campaign on Tuesday when he confirmed a report by the daily Le Monde that a member of his team had resigned over an apparent conflict of interest.

Jean-Jacques Mourad, a cardiologist, is said to have made nearly 60 business visits and appearances at conferences between 2013 and June 2016, paid for by the Servier pharmaceutical company, during which he ran up tens of thousands of euros of expenses

Mourad was a member of a working group on health issues in the Macron campaign.

Speaking after a campaign event in the Paris suburbs, Macron also said he had asked his party's ethics committee to ask all contributors to working groups to flag any possible conflicts of interest.

Le Canard Enchaine newspaper, which revealed the expenses scandal that almost derailed the campaign of conservative candidate Francois Fillon, also points the finger at Macron in its Wednesday edition.

The investigative paper alleges that a watchdog is probing accusations that favouritism was involved in the choice of public relations giant Havas to organise an event for Macron and French entrepreneurs at the CES electronics show in Las Vegas in 2016, when he was economy minister.

The paper said Havas was awarded the contract without bids being sought from other companies.

Denying the claims, Macron said Tuesday, “My ministry, when I was its minister, always respected rules on the bidding process and on public contracts.”