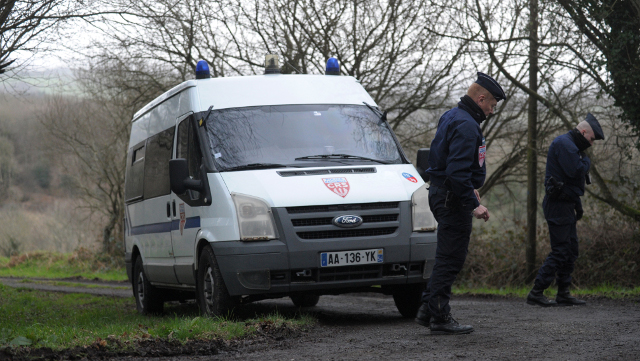 Investigators on Wednesday found body parts at the home in northwest France of the man who has confessed to killing four relatives with a crowbar, the prosecutor in the case said.

Hubert Caouissin was let out of custody to accompany the investigators to his farm in a remote part of Brittany and is cooperating in the gruesome search, Nantes prosecutor Pierre Sennes said in an email.

Caouissin, 46, had told investigators that he cut up the bodies of his brother-in-law and his family at his farm in the hamlet of Logonna-Quimerc'h.

He said he burned some of the body parts and buried others after killing Pascal Troadec and his wife Brigitte, both 49, and their two children, Charlotte, 18, and Sebastien, 21, in a rage over an inheritance dispute.

Caouissin's partner, 47-year-old Lydie Troadec — Brigitte's sister, who has been charged with helping dispose of the bodies — remained in custody and did not take part in the hunt, a source close to the probe said.

Both were charged Monday and remanded in custody in Nantes, some 300 kilometres (180 miles) to the southeast of where the murder took place.

Wearing white forensic suits under a light drizzle, hundreds of police and investigators fanned out in the woods and fields around Caoussin's farm and on the muddy banks of the Auln river that forms one boundary of the property.

Caouissin was employed at a shipyard in the port of Brest, but had been off work for the past three years suffering from depression. He told investigators that he thought Pascal Troadec had kept gold coins for himself that were part of an inheritance that should have been shared with him.

The value of the coins — and even their existence — remained uncertain.

The anger boiled over on the night of February 16, when he sneaked into the house in the Nantes suburb of Orvault where Pascal and Brigitte lived, murdering them and the children, both students who were visiting during school holidays.

Psychological units have been set up at their schools, which are planning memorial services for the two youths.