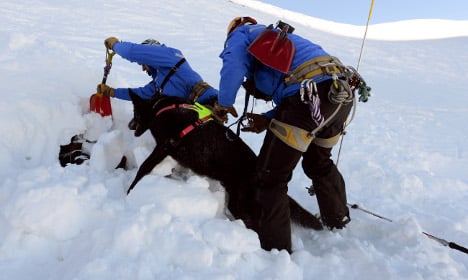 An avalanche hit the on-piste slopes of ski resort Tignes on Tuesday, burying skiers. It remains unknown as yet if people were injured or killed.

Four people were killed in an avalanche at the same ski resort last month.

While it's rare in France for avalanches to hit on-piste areas, there has been a string of tragedies off-piste in recent years that experts put down to weather conditions and ill-advised risk-taking.

Most avalanches are the result of a combination of weather and geological factors.

In general, an avalanche results from fresh heavy snowfall that fails to stick to snow already on the ground.

Another scenario is that of violent wind following a moderate snowfall at low or very low temperatures. The wind carries large quantities of snow that can then break up depending on the slope and the state of the ground underneath.

At temperatures below -15C (5F), far lighter snowfall can lead to an avalanche less than a metre thick.

Spring thaws bring another type of avalanche, with snowlides depending on how fast the snowpack melts. How many are there?

Each year between 500 and 1,500 avalanches are recorded in the French Alps.

Avalanche corridors are identified in most European countries, and in skiing areas explosives are used to set them off artificially.

Are the Alps more dangerous lately?

Dozens die each year in avalanches in France's popular ski resorts. At least 45 people died in snowslides during the 2014-15 winter season in France, according to ANENA, more than double the previous year's 20.

ANENA data show that between 1971 and 2011, avalanche accidents averaged 21, with an average of 30 fatalities.

Letang said that while more and more people are using areas that have not been cleared as safe, the surge has not been matched by an increase in fatalities.

How can the deaths be minimised?

Group members are advised to spread out, leaving some 20 metres between each other, to help avoid setting off a snowslide.

“People should observe a big safety distance when the snow cover is unstable,” Letang said. “Even if you won't avoid the avalanche, it would carry off one person, not 13” as in Monday's accident.

SEE ALSO: How to avoid risks of deadly Alps avalanches

Another version of this story was published in January 2016.