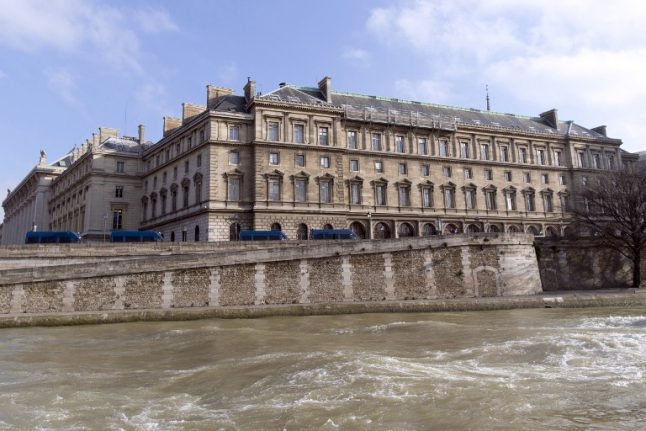 The Paris police headquarters. Photo: AFP
The 36-year-old suspect, Jonathan Guyot, will appear in court along with nine other people, including his wife, his policeman brother and two other officers.
They face a range of theft, drugs and money-laundering charges over a 2014 heist within the premises of Paris police headquarters, known as 36 quai des Orfevres, made famous in French-language detective novels.
With an estimated street-value of two million euros ($2.12 million), the 50-kilo (110-pound) haul of cocaine went missing on July 24th, 2014 from a safe three weeks after it was seized.
Footage from security cameras on that night shows Guyot entering the police building, and guards patrolling the entrance also say they saw him leave with two bags, according to prosecutors.
Guyot, who had been in the anti-drugs squad since 2010, maintains his innocence, but has presented alibis deemed “extravagant” by an investigating magistrate.
A code for the safe where the drugs were held was found on his mobile phone, prosecutors say.
Cocaine unaccounted for
Guyot, owner of a portfolio of properties in Paris and in southern France, was also carrying more than 24,000 euros in cash at the time of his arrest on August 2, 2014 — which he says he won from online gaming.
He is suspected to have handed over a total of 400,000 euros to two childhood friends, one of them a policeman.
Suspected drug dealer Farid Kharraki is believed to have sold the stolen drugs but denies any involvement in the affair, despite evidence that the two men were in touch before and after the night of the theft, according to prosecutors.
The missing cocaine remains unaccounted for to this day.
Guyot's brother, also a policeman, admitted to disposing of 150,000 euros in a lake in the suburbs of Paris, and giving 50,000 euros long-hidden in a bush nearby to a third party.
The trial is expected to last until March 17th.
Among the 10 defendants is a fraudster called Christophe Rocancourt, known for tricking celebrities with his false identities, who is suspected of helping Guyot retrieve some of his money. They were both in jail at the same time.
The Paris criminal police department has been at the centre of various scandals that have tarnished its reputation in recent years.
In April 2014, two elite officers were accused of raping a Canadian tourist inside 36 quai des Orfevres in a case that shocked France. The case did not go to trial and the two policemen were not sentenced.
The department suffered another blow in February 2015 after a top boss was suspended over suspicion that he leaked information about another top official under investigation for giving fake documents to illegal immigrants.