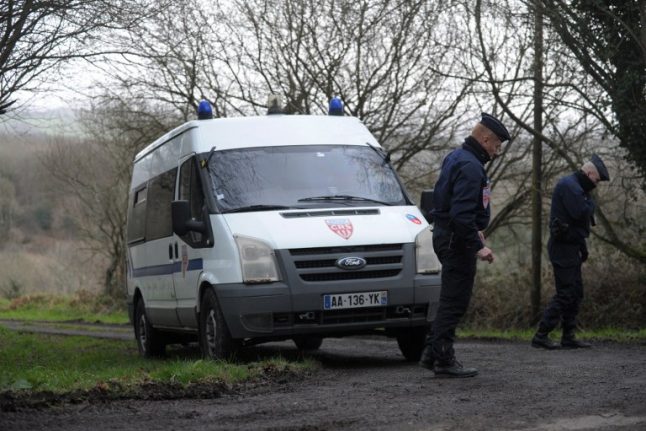 Photo: AFP
The father's brother-in-law Hubert Caouissin, who has confessed to the gruesome killings, went on to cut up the bodies, burning some parts and burying others, prosecutor Pierre Sennes told a news conference.
Pascal Troadec and his wife Brigitte, both 49, had gone missing along with their son Sebastien, 21, and their 18-year-old daughter Charlotte on February 16, sparking a mystery that gripped the nation.
Caouissin told investigators that he thought Pascal had kept gold coins for himself that “should have been shared with the rest of the family,” Sennes said, adding that he harboured “great rancour” over the decade-old dispute.
He is to be charged with murder, while his partner Lydie — Pascal's sister — faces charges of tampering with evidence and abetting the crime by helping him dispose of the bodies, Sennes said.
Caouissin told investigators he sneaked into the home in the Nantes suburb of Orvault on the evening of February 16, hiding in the garage until the four went to bed with the original intention of “obtaining information”, Sennes said.
Pascal and Brigitte came downstairs upon hearing noise on the ground floor, with Pascal wielding a crowbar, he said.
“A scene of great violence” ensued, with Caouissin wresting the crowbar from Pascal and using it to kill both him and Brigitte.
He then killed Sebastien and Charlotte, both students who were visiting during school holidays, Sennes said.
Caouissin stayed until dawn before returning to his home in Brittany some 300 kilometres (180 miles) away, where he told Lydie that he had killed her brother and the other three Troadecs.
He returned on February 17 to clean up the house and remove the bodies, which he loaded into Sebastien's car the following day.
Caouissin and Lydie Troadec spent the next two or three days trying to dispose of the bodies.
“It appears the bodies were dismembered, some buried and others burned,” Sennes said.
They cleaned Sebastien's car, “trying to get rid of the blood” and then left it in a church car park in the port of Saint Nazaire, about an hour's drive away, “as a sort of diversion”, Sennes said.
'Morbid treasure hunt'
“Much more work remains to be done,” Sennes said, noting that investigators still do not know where the body parts are buried.
Suspicions in the case had initially centred on Sebastien Troadec, who suffered psychological problems and had been ordered to carry out community service in 2013, when he was a minor, for making death threats on his blog.
But the focus shifted after traces of Caouissin's DNA were found at the Troadecs' home and then in Sebastien's car.
Caouissin and Lydie Troadec had already been quizzed for nearly 21 hours at the start of the probe, when Caouissin told investigators he had fallen out with the family over the inheritance dispute.
The pair were taken into custody in the northwestern port of Brest on Sunday.
Initial searches at the Troadecs' home found traces of blood from the parents and Sebastien as well as signs of efforts to clean them up.
Investigators also found Sebastien's cellphone and his mother's watch covered with blood.
A judicial probe into murder, abduction and illegal confinement was opened on February 27, 11 days after Brigitte's sister raised the alarm.
Few clues had emerged since the family's mysterious disappearance.
The first breakthrough came on March 1 when a jogger found a pair of grey jeans in a forested area by the Brittany town of Dirinon, with Charlotte's national health card in a pocket.
The next day, two books belonging to Pascal were found some 500 metres away in the area near where the suspect and his wife once lived.
Also on March 2, investigators found Sebastien's car in Saint Nazaire.
Sennes said last Friday that the perpetrator might have sought to plant clues in a “morbid treasure hunt”.
Url copied to clipboard!