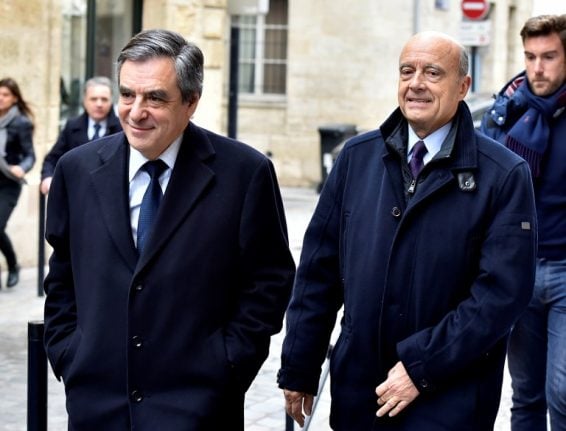 Fillon and Juppé. Photo: AFP
The conservative was in a defiant mood after holding a rally in Paris attended by tens of thousands of flag-waving supporters.
“No one today can prevent me being a candidate,” Fillon said in a TV interview late Sunday in which he again said an investigation into allegations he gave his wife a highly paid fake parliamentary job was politically motivated.
“Of course it is aimed at stopping me being a candidate,” said Fillon, who is to be charged on March 15th.
Former prime minister Alain Juppé has been tipped as a likely replacement, with leaders of their Republicans party meeting Monday evening and Juppé also to make an announcement at 10:30 on Monday morning.
It remains unknown as yet whether Juppé will announce a rival bid to Fillon, or whether he will pledge his support, although sources told Les Obs newspaper that Juppé would not be running.
Former president Nicolas Sarkozy, the other main figure in the Republicans party, has proposed a meeting between Juppé and Fillon to find a way out of the crisis.
Sarkozy reportedly said last week that “things could not go on like this” after Fillon revealed he had summoned by investigating magistrates to face charges over the Penelopegate fake jobs scandal.
Fillon has dismissed suggestions the party could remove him.
“If the voters of the right and the centre wanted Alain Juppé, they would have voted for Alain Juppé,” he said.
He was criticised on social media after saying he was “not autistic” and saw the problems in his campaign.
Fillon, a devout Catholic, beat Juppé in the Republicans' primary in November, pulling off a surprise victory by campaigning as a “clean” candidate.
'Fake jobs'
He was the frontrunner in the presidential race until Le Canard Enchaine newspaper alleged in mid-January that he paid his wife Penelope and two of their children nearly €900,000 ($950,000) as his parliamentary assistants.
Senior members of Fillon's party have called for the 63-year-old to step aside, with a poll released Sunday confirming he was haemorrhaging support and would be eliminated in the first round of the election on April 23.
Most surveys show far-right leader Marine Le Pen and 39-year-old centrist Emmanuel Macron would progress to the runoff on May 7.
Fillon had previously promised to quit if he were charged but has since pulled back from the pledge.
He portrays himself as a victim of injustice who intends to put his case directly to the people.
Earlier, Fillon gave a speech to tricolour-waving supporters at the Trocadero Square on the opposite bank of the Seine to the Eiffel Tower.
He apologised for the expenses scandal but said he was sure he would be proved innocent.
His team claimed 200,000 people attended the rally but AFP reporters put the turnout in the tens of thousands. Police said the maximum capacity of the square was about 40,000.
Fillon's British-born wife Penelope, who accompanied him at the rally, broke her silence earlier Sunday, telling Le Journal du Dimanche she had carried out “a lot of different tasks” for her husband during his lengthy career.
She had also urged him to “keep going to the end” but said only he could make the final decision.
Police raided the Fillons' country manor house near Le Mans on Friday and their Paris apartment was searched a day earlier.
Fresh calls to step down
Despite Fillon's defiance, there were fresh calls for him to stand aside.
Christian Estrosi, who leads the southern region around Marseille, said he and two other senior right-wingers would meet Fillon on Monday to urge him to “withdraw graciously”.
Key members of Fillon's team have already abandoned ship and party deputy general secretary Gerald Darmanin said late Sunday he was quitting his post over Fillon's refusal to step down.
Any replacement would have to be named before a fast-approaching March 17 deadline to collect the 500 signatures from elected officials that a candidate needs in order to stand.
Juppé, who is more centrist than Fillon, was given a suspended jail sentence in 2004 over a party funding scandal.
The accusations against Fillon have added to an already unpredictable race.
Le Pen, 48, campaigning on an anti-immigration and anti-EU platform, has sought to capitalise on the anti-establishment sentiment that propelled US President Donald Trump to power and led to Britain's vote to leave the EU.
Polls currently show however that Le Pen would be beaten in the runoff by either Macron or the conservative candidate.