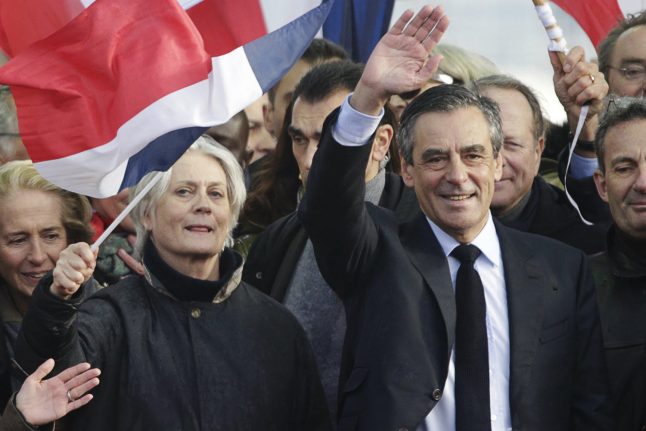 “They say that I'm on my own. They want me to be on my own,” Fillon said, thanking the tens of thousands, including his wife Penelope, who had turned up to support him.

“Never give up the fight,” he told them whilst once again delivering a combative speech in which he defied the pressure to quit the French presidential campaign.

With dozens of members of his own party deserting Fillon's campaign, Sunday's rally on the Trocadero plaza opposite the Eiffel Tower was seen as a test of how much confidence remains in the candidate.

Speaking to those members of his party who had deserted him since he admitted he was to be charged over allegations he gave his wife and children “fake jobs”, the conservative said: “I have examined my conscience… they need to examine theirs.”

Fillon also admitted he had made “mistakes” and apologized to his supporters, telling them they had been forgotten amid the judicial investigation.

“My first mistake was asking my wife to work for me,” he said, adding his “second mistake” was hesitating before speaking to his supporters about the allegations. Organizers of the rally said 200,000 Fillon supporters were present by around 3pm – but police will likely have a very different figure, which will almost certainly be lower.

The figure of 200,000 was mocked on social media, with many pointing out that the plaza only fits a maximum of 50,000 people.

Whatever the true number, the Trocadero plaza was awash with thousands of French Tricolore flags, waved by supporters who had come from all over the country to defend their candidate.

Many spoke of the need to defend Fillon's programme suggesting, his plan for France was more important to them than the allegations he had helped his wife earn hundreds of thousands of euros for a “fake job” as a parliamentary assistant. The crowd chanted “Fillon president!”, “Fillon hold on, France is behind you!” and sang numerous renditions of the Marseillaise.

“They attack me from everywhere. But I have to listen to this enormous crowd that pushed me forward,” said Fillon.

As he spoke the heavens opened and the rain, which had stopped briefly, began to fall again. A sea of umbrellas replaced the tricolores.

But even if the images of thousands of supporters will give Fillon ammunition to those who doubt him, his fate may be taken out of his hands by his own party.

The Republicans party knows the danger is that an election that they once expected to win handily could slip away if Fillon remains their candidate.

Polls currently show he could be eliminated in the first round of the two-stage contest on April 23, leaving Le Pen and Macron to contest the May 7 runoff.

The Republicans' decision-making body is to meet Monday evening — a day earlier than planned — “to evaluate the situation”, the party said Saturday.

On Sunday it emerged that former president Nicolas Sarkozy and Alain Juppé, the man beat by Fillon in November's primary had talked on the phone to “discuss a way out of the crisis”.

Several other heavyweights in the Republicans party have also been meeting to discuss the way forward. Christian Estrosi, the president of the Provence-Alpes-Côte d'Azur region said a “respectful initiative” would be taken to persuade Fillon to step aside and allow Juppé to run in his place.

Many in his party resent the fact that Fillon initially said he would step down if charged over the fake jobs allegations, but then went back on his word.

He is due to meet magistrates on March 15th where he is expected to be placed under formal investigation.

Whether he will still be the official candidate of France's right by the time he meets those judges is far from clear.

Over the next couple of days Fillon's fate will likely be resolved.