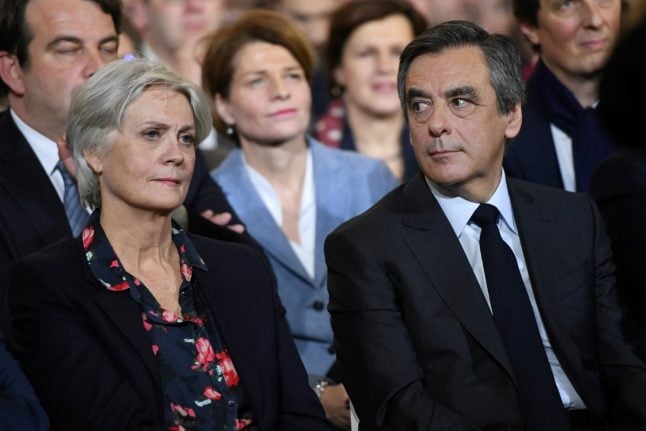 Francois Fillon and his wife Penelope during a campaign rally in Paris. Photo: Eric Feferberg/AFP

The former prime minister hopes to keep his election hopes alive with a rally in Paris but he is struggling to regain the initiative after a week in which members of his team deserted him.

Their departures followed Fillon's disclosure that he would face charges over claims he gave his British-born wife and two of their children bogus parliamentary jobs.

In her first interview since the allegations of nearly 900,000 euros ($950,000) in pay, Penelope Fillon told Le Journal du Dimanche she had carried out “a lot of different tasks” for her husband during his lengthy political career.

She had also urged him to “keep going to the end” but said only he could make the decision to stay in the race.

Fillon, who turned 63 on Saturday, was once the frontrunner in an election in which Marine Le Pen is attempting to steer the far-right into power in a major European country.

But Fillon's support plummeted after the financial claims were made and he is now polling third behind Le Pen and 39-year-old centrist Emmanuel Macron.

French lawmakers are allowed to employ family members, but investigators are looking into what work Penelope did after it emerged she did not even have a pass for the National Assembly building.

“He needed someone to do a lot of different tasks, and if it wasn't for me, he would have paid someone to do it, so we decided it would be me,” Penelope told the paper.

The former prime minister has claimed the accusations are politically motivated, even suggesting he believes the ruling Socialist government is behind the investigation.

He told supporters Saturday their opponents were trying to “intimidate” them.

The danger for the conservative Republicans party is that an election that they once expected to win handily could slip away if Fillon remains their candidate.

Polls currently show he could be eliminated in the first round of the two-stage contest on April 23, leaving Le Pen and Macron to contest the May 7 runoff.

The Republicans' decision-making body is to meet Monday evening – a day earlier than planned – “to evaluate the situation”, the party said Saturday.

Pressure grew on Fillon after it emerged police had raided his country manor house near Le Mans on Friday looking for evidence. His Paris apartment was searched on Thursday.

With some members of his party urging him to drop out, Sunday's rally on the Trocadero plaza opposite the Eiffel Tower – heavy rain is forecast – will be a test of how much confidence remains.

Fillon was a surprise winner of the conservative nominating contest in November, campaigning as a “Mr Clean” unsullied by the legal difficulties of his opponents and pledging to slash half a million civil servants' jobs.

But the claims about his expenses have led to barbs from critics that his moral authority has been undermined.

On Wednesday, Fillon revealed he would meet investigating magistrates on March 15 and be charged. His wife is also to face charges.

Fillon had previously said he would step down if such a development happened. But, to the dismay of many of his aides, he angrily accused the judicial system of bias and vowed to fight on.

His foreign affairs point man and campaign spokesman have quit and the leader of the small centrist UDI party said it was withdrawing its backing.

On Saturday, five members of the European Parliament from the Republicans also called for another candidate to be appointed before the March 17 deadline.

With just seven weeks to go before polling begins, the entourage of 71-year-old former premier Alain Juppé has said he is prepared to take over.

But Juppé, who is more centrist than Fillon, also has baggage – he was given a suspended jail sentence in 2004 over a party funding scandal.

Yet a poll on Friday showed Juppé would vault into the lead if he stood.

The financial accusations have added to an already open race. Le Pen, 48, campaigning on an anti-immigration and anti-EU platform, has sought to capitalise on the anti-establishment sentiment that propelled US President Donald Trump to power and led to the British vote to leave the European Union.

Polls currently show however that the National Front chief will be beaten in the second round by either the fast-rising Macron or the conservative candidate.