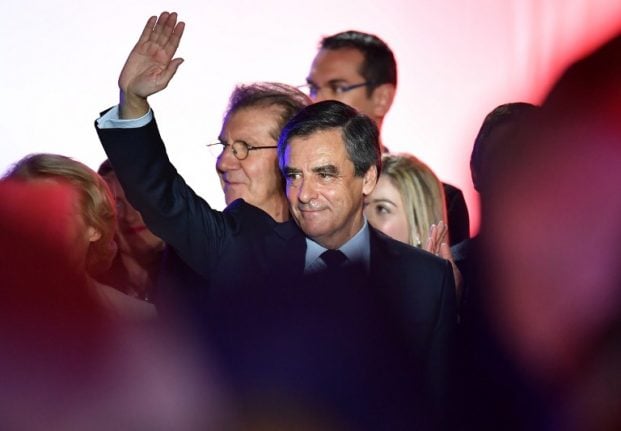 Photo: AFP
Fillon will mark his 63rd birthday on Saturday, but a day that his entourage would once have feted for France's president-in-waiting has been soured.
On Friday, accusations that Fillon gave fake parliamentary jobs to his family threatened to engulf the election bid. His spokesman and campaign manager quit and the leader of a small centrist party confirmed it was withdrawing its backing for him as the conservative candidate.
With support for Fillon ebbing away and a deadline looming for the April 23 elections, 71-year-old veteran Alain Juppé let it be known he was prepared to take over as champion of the Republicans party.
Juppé, a former prime minister who was sentenced to a suspended jail sentence in 2004 over a party funding scandal, was beaten by Fillon in the conservative primary in November.
Fillon will try to wrest back control of his campaign by setting out his policies on Saturday before holding a rally on Sunday near the Eiffel Tower.
Lost moral authority?
Pressure ratcheted up on Fillon after the former premier revealed on Wednesday that he would be charged over allegations he paid his wife Penelope and children nearly 900,000 euros ($950,000) for allegedly bogus parliamentary jobs, over a period spanning more than a decade.
Before the allegations surfaced, Fillon was the clear leader in opinion polls.
But he has been overtaken by far-right candidate Marine Le Pen and pro-business centrist Emmanuel Macron.
Defying much of mainstream opinion, Fillon has vowed to fight on, saying he is a victim of a “political assassination” and declaring he will place his future in the hands of the French public.
In an upbeat online video message urging supporters to attend the weekend rally, Fillon said that only he could “restore France's strength”.
His headline policy is a pledge to slash half a million civil servants' jobs to cut public spending, but critics argue he has lost moral authority.
With the March 17 deadline for submitting the signatures necessary for a candidacy fast approaching, a member of Juppé's entourage told AFP he was prepared to take over — under certain conditions.
Juppé “will not refuse if all the conditions are met — Francois Fillon has to take the decision to pull out himself and the rightwing and centre camps… have to be united behind him”, the unnamed source said.
Juppé to save conservatives?
One opinion poll Friday showed that Juppé — who is viewed as more centrist than Fillon — would be catapulted into the lead if he took over.
Juppé would have 26.5 percent of votes, giving him a narrow lead over Macron on 25 percent, while Le Pen would slip to third place on 24 percent, according to the Odoxa-Dentsu Consulting poll of 943 people.
The first round of elections takes place on April 23, with a runoff on May 7 between the two front-runners if no candidate wins an outright majority.
Since his defeat in the primary, Juppé has stayed out of the fray and has kept a low profile, largely remaining in the southwest city of Bordeaux where he is mayor.
He has already made a remarkable political comeback after being given a suspended 14-month jail sentence in 2004 over a party funding scandal.
Le Pen, campaigning on an anti-immigration and anti-EU platform, is forecast to reach the second round of an election that is influenced by the same populist themes that propelled US President Donald Trump to power and led to the Brexit vote in Britain.
Polls currently show however that Le Pen will be beaten in the runoff by either the fast-rising Macron or the conservative candidate.
In his rebuttal, Fillon lashed out at judges, alleging that leftwing enemies are behind the investigation.
His attack on the judiciary sparked particular ire, both within and outside his party.
Socialist President Francois Hollande slapped Fillon down, saying being a presidential candidate did not give him the right to “cast suspicion on the work of the police and judges”.