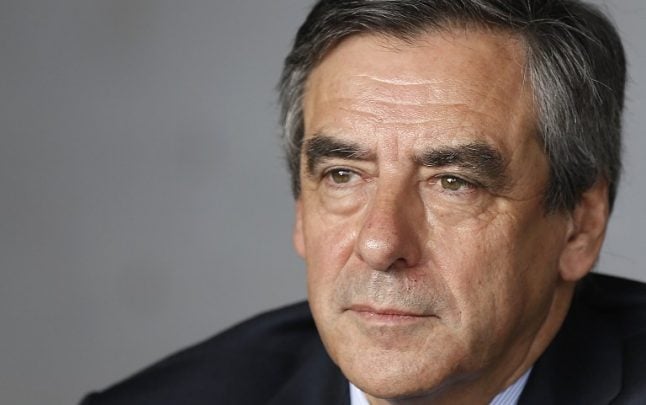 Photo: AFP
Defections from his camp began soon after a defiant speech on Wednesday when the 62-year-old said he would “not surrender” and on Friday calls grew for his rival Alain Juppé to take his place.
The latest to jump Fillon's ship on Friday was his spokesman Thierry Solere, the man who has basically had the job of repeatedly defending Fillon to the press. His decision to quit will be a bug blow to Fillon.
Juppé, 71, like Fillon a former prime minister, was the runner-up in a primary organised by the Republicans party in November.
On Friday his camp let it be known that he could step in if Fillon abandons the race.
Juppe, 71, “will not refuse if all the conditions are met — Francois Fillon has to take the decision to pull out himself and the rightwing and centre camps… have to be united behind him”, the source told AFP.
The fact Juppé now appears willing will please those in the party who have been calling on him to step forward.
A former Fillon ally, who preferred to remain anonymous, told BFM TV that it was high time Juppé stepped up to the plate.
“Juppé needs to come out of the woods and quickly – if he doesn't do it within the next fortnight then we'll see members of the party voting for Macron and our electorate voting for Marine Le Pen,” he said. Alain Juppé. Photo: AFP
Talk of a “Plan J” (J for Juppé) will only hep more pressure on Fillon, that has been growing ever since he decided to give up his campaign despite facing charges over the fake jobs scandal.
On Thursday former rightwing prime minister, Dominique de Villepin, warned that Fillon was dragging his camp into an “abyss”.
Writing in the conservative daily Le Figaro, he said: “He can no longer be a candidate because he can no longer conduct a campaign to defend his ideas or republican and democratic ideals.”
The left-leaning weekly L'Obs, under the simple headline “Fillon's Suicide”, likened being at his speech on Wednesday to attending a funeral, wondering out loud why the rightwing Republicans party continued to support the “Fillon millstone”.
Members of Fillon's campaign “couldn't even look” at him, it said, describing them as “paralysed… by the spectacle that their moribund candidate has imposed on them.”
To add to Fillon's woes, police raided his Paris home late on Thursday.
Go-for-broke
Rightwing lawmaker and former magistrate Georges Fenech was also among those calling for a switch to Juppé as “the only one today, with his experience, to be able to take up the torch”.
Deserters included Fillon's spokesman Benoist Apparu, who was Juppé's mouthpiece before the November primary.
The left-wing daily Liberation is keeping a running tally of the defectors, with the list reaching 63 by late afternoon Thursday.
Fillon, ever defiant, insisted that his “base is holding” with polls showing him still only four or five points behind the election leaders centrist Emmanuel Macron and far-right leader Marine Le Pen.
France goes to the polls for the two-stage election on April 23rd and May 7th. Fillon. Photo: AFP
Speaking at a campaign event Thursday in the Provencal city of Nimes, he said: “The French people back me.”
He said he could go it alone with the support of elected officials. “I rely on the French people and the French people will speak out.”
But in a Harris poll conducted Thursday, only one in four respondents said they thought Fillon should stay in the race.
Fillon, claiming he was the target of a “political assassination”, vowed at a hastily convened news conference Wednesday: “I won't give in, I won't surrender and I won't withdraw.”
Fillon “has opted for a go-for-broke strategy and it's too late to turn back,” political scientist Martial Foucault told AFP.
'Like a sect'
A member of Fillon's Republicans party told AFP on condition of anonymity that his supporters had become “like a sect” and predicted that his campaign would collapse in “24 to 48 hours”.
But Bruno Retailleau, the Republicans' group leader in the Senate, angrily denied “any sort of fanaticism” among Fillon's supporters, saying they were driven by a sense of “duty”.
Analysts say Fillon is benefiting from the split between party supporters and defectors by becoming the “default” candidate.
Although Fillon's poll numbers have largely recovered since revelations in late January that he placed his wife on the public payroll with scant work to show for it, he has fallen behind Macron.
A new voter survey out Thursday showed Macron scoring 24 percent, ahead of Fillon's 19 percent in the first round of the election.
Le Pen, 48, leads the pack as she has consistently since mid-January with 27 percent.
But polls currently show that in the runoff, Macron would go on to easily defeat Le Pen. Pro-Fillon rally on sunday
In practical terms, time is running out because candidates face a March 17th deadline to present a required 500 signatures of elected officials who agree to sponsor them.
While French law does not bar a candidate who is facing criminal charges to stand for office, Fillon has also faced criticism after he questioned the justice system's impartiality.
On Wednesday, he evoked comparisons with US president Donald Trump by blasting the media and claiming the investigation had been directed against him and that “the presumption of innocence has entirely and completely disappeared.”
Outgoing Socialist President Francois Hollande weighed in over the remarks, saying: “Running for president doesn't give you the right to cast suspicion on the work of the police and judges.”
On Sunday Paris will host a pro-Fillon meeting at the Trocadero, where Fillon will hope around 50,000 supporters will turn out to show their backing.
But some are suggesting his bid could fall apart before the weekend is over.