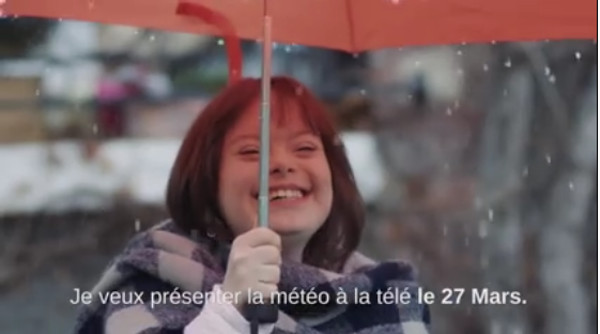 Photo: Mélanie peut le faire/Facebook
Hardly a week ago, a 21-year-old Frenchwoman with Down's Syndrome set up a Facebook page with the hope of eventually presenting the weather on TV.
On Monday, she uploaded a 30 second video (below) explaining her ambitions.
“After 100,000 likes, I'm presenting the weather on TV,” she explained, with a hashtag that translates to “Mélanie can do it”.
And it's safe to say her expectations were exceeded – and dramatically.
In fact, a whopping 2.8 million people have seen her video in just two days.
The video itself attracted 134,000 likes and 53,000 shares, with 180,000 people (and counting) “liking” Mélanie's page on Facebook.
In other words, above and beyond the goal of 100,000.
On Friday, the France 2 and BFM TV channels both said that they'll let Mélanie present the weather.
Her segment will appear on March 27th. “I am touched by all your messages and likes,” the 21-year-old wrote. “Thanks to you my dream will come true.”
Mélanie was backed by the National Union of Charities for Parents with Disabled Children (UNAPEI), which welcomed the viral affect of the campaign.
“People with disabilities are invisible these days,” the groups said in a statement.
“The 100,000 likes are mostly about support, and it means a lot more than just a thumbs up.”