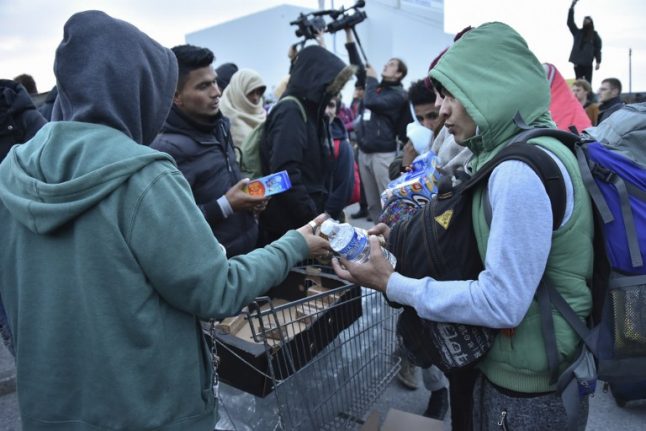 Photo: AFP
The mayor's office has banned people from gathering in the zone near the city's port which was home to the notorious “Jungle” camp until  October when it was destroyed by authorities.
“It's not a directive against the distribution of meals, but against gatherings because these lead to law and order issues as well as security and waste problems,” rightwing mayor Natacha Bouchart told AFP.
“I took this decision to make sure that no permanent base or squat is created around Calais,” she added.
Two local groups which help migrants in the area said they would go to court to fight the decision.
“We are not going to let these people, including lots of children, starve to death. They already live outside,” Gael Manzi from the group Utopia 56 said, adding that 500 meals were distributed daily.
Calais has been a magnet for refugees and migrants trying to reach Britain for more than a decade, with French authorities repeatedly tearing down dirty and unsafe camps there.
Migrants try to break into trucks heading to Britain, while many locals resent their presence.
Several thousand people fleeing war or poverty in the “Jungle” last October were sent to accommodation around France, leading to fierce criticism from far-right group the National Front.
The Socialist government, which is determined to try to stop another camp springing up in Calais, has recently criticised Britain for reneging on a deal to resettle hundreds of underage migrants from the camp.