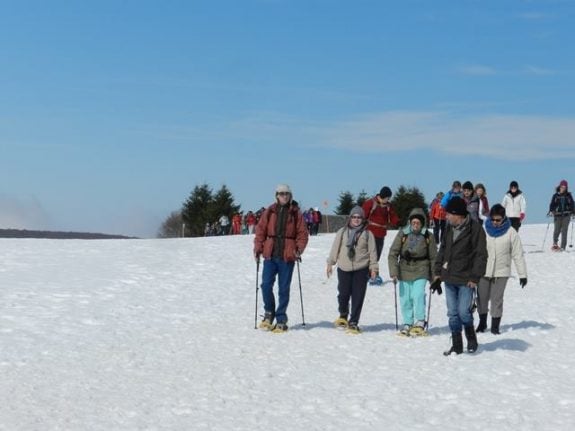 Photo: Les Traces/Facebook
Paris Book Fair, March 24th to 27th
The Paris Book Fair, held at the Porte de Versailles, is a must for bookworms.
The website says it's “the only literary get-together of its kind, reflecting the extraordinary richness and diversity of publishing”.
Expect four days in celebration of reading, featuring over 3,000 famous or up-and-coming authors from around the world who will be on hand to meet the public.
Read more here (in English). International Orchid Exhibition, Vaucelles Abbey, northern France, March 9th to 13th
It has been described as “a must for all orchid lovers” – and it's being held in a truly exceptional setting, the halls of the Vaucelles Abbey.
Specialists will come from around the world for this five-day festival near Cambrai in northern France. In its 27th year, orchid producers and lovers will exhibit their best creations and organize workshops for anyone wishing to know more about the flower.
See more pictures here. Cheese tasting on skis, Aubrac, Central France, March 12th
Only in France would you find cheese tasting on skis. Okay, perhaps Switzerland too. But anyhow, check out “Les Traces du Fromage” this month if you feel like some seriously cheesy hiking.
Every year, almost 2,000 food aficionados brave the winter cold to go on a the trek leading through the beautiful landscape of the Aubrac region. Equipped with snow gear, the hikers follow a trail and stop at several intervals along the way to sample cheese and other goods from the area. Photo: Les Traces/Facebook
Paris-Nice cycle race, March 5th-12th
Now in its 75th year, the 1,290km cycle race between Paris and Nice is also known as the Race to the Sun, due to the start in Paris, where March is often cold and windy, before finishing in the sunny south of the country. It covers seven gruelling stages of varying terrains – you can view the route here.
Run by the same company that organizes the Tour de France, it is a great chance to see some of the world’s top cyclists in action – whether you choose to cheer them on from the side of the road, or from the comfort of your sofa. Italian film festival, Nice, March 11th-25th
If you’re struggling with French and tired of being constantly corrected on your pronunciation, this celebration of Italian cinema might be a welcome break. Eight films will have their premiere at the festival, and there will also be screenings of old favourites and little-known gems.
Women's carnival, Paris, March 26th
Just because the Women’s Carnival in Paris is smaller than the one in Nice doesn’t mean it’s any less fun. Women are supposed to dress up as queens and while men are welcome as well they need to dress up as a woman.
So better get your crown ready or start rummaging through someone else's closet to find the perfect outfit. However costumes are not obligatory.

Photo: Basili/WikiCommons
Banlieue blues jazz festival, various locations 3rd – 31st st March
Plenty of Parisians are guilty of rarely venturing out of the city centre but this jazz festival could be the event to tempt them into the suburbs.
With concerts in different venues across the Parisian suburbs; and everything from big bands to solo artists, it's suitable for jazz fanatics and music fans in general. A standard pass is €16.
International cheese and wine festival, Coulommiers, March 7-10th
Things don't get much more French than this gastronomic spectacular. Over 350 cheese and wine experts will be at the show to display and sell local produce, and farm animals will also be on show.
As well as the stalls, there will also be an elaborate dinner on the Saturday, followed by a dance. The region's 'best brie' will be crowned, and spectators can join in games and competitions too, such as guessing the weight of cows. Monte Carlo comedy film festival, Monaco, February 28th – March 5th
'Comedy is a serious matter' is the motto of this festival, where comedy films from all over the world will have their premiere and compete for the title of Best Comedy of 2017.
Read more about it here (in English).
Mulhouse Carnival, March 3rd to 5th
Head out to Mulhouse in eastern France for this very colourful event, which is celebrating its 64th anniversary this year.