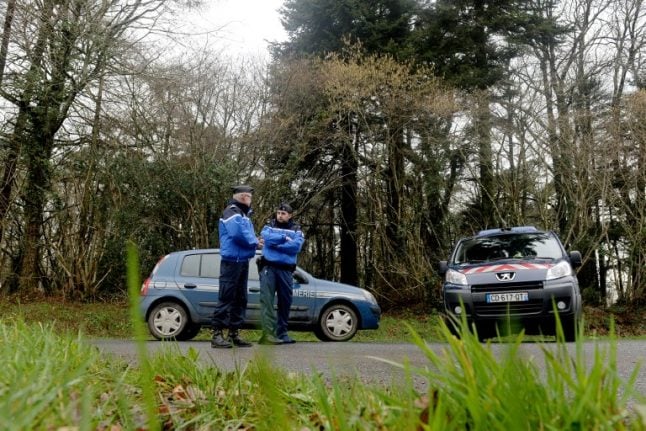 French gendarmes block a road where the discovery was made. Photo: AFP
A national health insurance card belonging to Charlotte Troadec, 18, was found in the pocket of a pair of trousers a three-hour drive from where she was last seen, a source close to the inquiry said.
Search teams with sniffer dogs were deployed to the area around the Brittany town of Dirinon, where the discovery was made, 13 days after Charlotte, her brother Sebastien, 21, and their 49-year-old parents, Pascal and Brigitte, disappeared.
A judicial probe into murder, abduction and illegal confinement was opened on Monday after the authorities were alerted to the disappearance last week.
Police said in a bulletin dated February 24th that Sebastien was suspected of “putting in place a macabre plan aimed at snuffing out the members of his family and maybe himself.”
Traffic was cut off on roads around Dirinon in an area of woods and fields, while a helicopter flew overhead, an AFP reporter said.
The town is near the port of Brest and some 280 kilometres (175 miles) from the family's home in Orvault near the western city of Nantes.
The source said the parents were originally from the Brest area.
Bloodstains were found at the house in Orvault, including on Sebastien's cellphone and on his mother's watch, as well as efforts to wipe some of them away. Police block off the road near the mystery house. Photo: AFP
New searches at house
Investigators returned to the house on Wednesday with “very sophisticated” scientific and technical equipment to search for further clues, Nantes prosecutor Pierre Sennes said.
Wearing white forensic suits, they were seen entering and leaving the mystery house, where a police security zone was set up.
Traces of blood from the father, who works for a company that makes shop signs, his wife and their son have been identified but so far there are no signs of the daughter's blood, Sennes said.
He said earlier that investigators had been unable to find Sebastien's car. The parents' two cars have been sequestered.
No toothbrushes or hairbrushes were found in the house, and the beds had been stripped, with some sheets drying on an indoor rack.
Food was going off in the refrigerator and there were dishes in the sink, according to Sennes, who said it was as “if the life of the house was frozen in time”.
Sebastien's cellphone was the last to be switched off, Sennes said.
On February 16th, the mother and daughter reported the fraudulent use of Charlotte's bank card to pay for online video gaming, Sennes said Wednesday.
Neighbours and a source close to the probe said Sebastien had had psychological problems and Pascal had suffered from depression in the past.
Sennes noted that Sebastien had been sentenced to carry out community service after being convicted in 2013, when he was a minor, for making death threats on his blog.
But classmates of Sebastien's interviewed by French media described a quiet, friendly youth, with one saying he was “always ready to help out”.