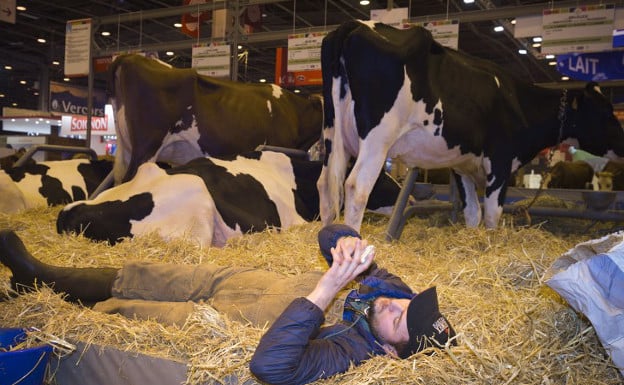 Photo: AFP
The Salon de l'Agriculture in Paris is a key publicity event in the electoral calendar, where presidential candidates go for their “stroking the cow” photo-op.
It's also a good place to gauge the general feeling of those who make their livelihood in France's important agriculture industry.
And the mood does not appear good.
Jean Joel Sillac, a cattle breeder in Nouvelle Aquitaine in southwestern France, and winner of 2016's prize cow, says the atmosphere has changed, “this year people are a lot more morose,” he told The Local. “We're all frustrated”.
“We're realising that the debates concerning agriculture and farmers aren't being listened to any more”.
Many of the stall-holders at the expo felt the same way, and told us they didn't feel the choice of candidates for the upcoming presidential election inspired much confidence that their concerns would be heard any time soon.
“They don't give us hope any more because they're so far from the reality,” Alain Benoit, another farmer at the exposition told The Local.
“They all come here to see the Salon de l'Agriculture, but they don't give real answers to real questions.”
Dairy farmer Marie Fauer added: “I can't think of one candidate who matches up to what I want.”
She says the most important thing is that the candidate “stops thinking that France is so rich, France is this and that, they need to be a bit more humble”.
It comes as a surprise, given this feeling of mistrust and contempt for politicians, that the candidate who appeared to be the most popular among French farmers at the show was the scandal-hit Francois Fillon. Photo. AFP
Yes, the right-wing candidate who is to be charged over misuse of public funds for allegedly paying his wife Penelope over €800,000 for a fake job still has friends among France's farmers.
The organisation Agriculture et Liberté, conducting a survey of farmers found that three days into the show, the Les Republicains candidate was coming on top, followed closely by Front National's Marine Le Pen.
“At the moment, it's Fillon, at 22 percent, and then you have Le Pen after at 18 percent,” Daisy Odabasi of Agriculture et Liberté, told The Local.
Despite Penelopegate, as it's known, it seems that many of those at the expo were ready to forgive and forget.
“Before it was Fillon, but now … it's still Fillon” Giselle Perrillat-Collomb, a dairy farmer in Haute Savoie told The Local when asked who she would vote for. Although she agreed that Fillon had lost some of the public's trust after the scandal.
Fillon's battle with Le Pen to win over the agricultural community is tight, and some farmers said it was still a close call for them between the two. Photo: AFP
Le Pen, who attended the event on Monday, was the star attraction, with some spectators climbing up onto haystacks to get a glimpse of the controversial National Front candidate.
Pierre Besançon, a cattle farmer at the salon told The Local he would vote for Le Pen, but only because all the other candidates weren't up to much.
“Emmanuel Macron, he's rubbish”  Besançon told The Local, citing the former banker's connections with the world of finance. “Politicians have left us behind. Le Pen is something new”.
However, others said Le Pen isn't good news for the farming community. “Le Pen has no proposals for us,” Alain Benoit told The Local.
For many farmers who do support her bid, the attraction may be in her anti-EU stance and promise to take France out of the union if she can't reinstate a national currency, rather than specific agricultural policies.
French farmers have been a significant voice in anti-EU sentiment, blockading roads with tractors and even dumping manure on buildings and Spanish wine on motorways in protest over slumping prices for their products.
But it would be wrong to say that all farmers are against the EU. Photo: AFP
“One thing we're sure about is that we need Europe,” Marianne Dutoit, director of the National Federation of Agricultural Worker's Unions (FNSEA) told The Local.
Dutoit fears a “Frexit” (France leaving the EU) saying “Brexit was a catastrophe, what happened in the UK scared us”.
In terms of candidates, Dutoit declined to show her support for any one runner, “we just need someone who will defend Europe” she told The Local.
By Rose Trigg