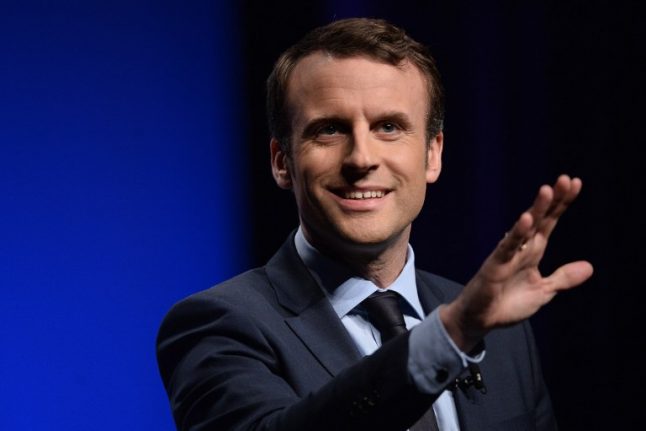 Photo: AFP
Macron, a frontrunner in the French presidential elections, finally shed some light on his agenda in an interview with Le Parisien newspaper on Wednesday.
Here are some of the key points.
An end to nepotism in government
“We will forbid MPs and senators from employing their family members, to put an end to nepotism,” Macron told the paper.
He added that he also aimed to reduce conflicts of interest by prohibiting MPs from carrying out advisory activities.
This came as it was announced that his rival Francois Fillon would be charged over a fake jobs scandal. A focus on children's education
Macron wants to create an additional 4,000 to 5,000 teaching positions, with a strong focus on younger children.
“The heart of the battle is at primary school level – 20 percent of CM2 pupils don't know how to read, write, or count properly,” he told the paper, referring to children at the end of primary school (7th grade) who are 10 or 11 years old.
He wants to focus on setting a limit of 12 pupils per teacher in some classes – while giving some teachers in “priority” areas an annual bonus of €3,000.
Most notably Macron wants schools to be more independent when it comes to both recruitment and the curriculum, rather than central government being in charge. He would also give local mayors the chance to change primary school hours rather than stick to the national system.
He also wants a law change to reform the school map (carte scolaire) to allow parents more choice over where to send their kids to school.
He also wants to forbid the use of mobile phones in primary and high school, and bring back bilingual classes.

Macron says he has no intention to raise the retirement age but he does want to reform the pension systems to make them universal, in other words so those working in the private and public sector get the same deal.

“This will be the real end of inequalities,” he said. More police and a continued fight on terror
The state of emergency, which has been in place since the Paris terror attacks of November 2015, will stay in place, Macron said.
“I'll evaluate the need to keep it running based on the level of risk set by intelligence services,” he said.
He added that he wasn't in favour of stripping people's nationality “or any other symbolic measure that would divide the country”.
Macron would bring in 10,000 new police officers over his five-year mandate, on top of the 9,000 that are already in training.
Closer bond with youths in the suburbs
Macron has said that discord between youths and police in the suburbs is “a major point” for him to tackle.
And to do this, he said he plans “to reconcile young people with the Republic of France by rebuilding opportunities through school, culture, work, and economic integration”.
More concretely, he told Le Parisien that he plans to add a “daily security police” in the area in the hope of “establishing a new relationship between police and youths”. Macron promises more to come
Macron is expected to deliver his full agenda on Friday morning. Here's an idea of what it could contain based on previous interviews Macron has given about his programme.
An adjusted 35-hour working week
While he has said recently that he doesn't actually want to scrap France's famous 35-hour week, he has said that he intends to tweak the way it's applied.
Essentially, this will mean that companies could potentially offer workers overtime in some cases.
Focus on taxing the real estate of the wealthy
Macron has said he aims to move France's tax on personal assets over €1.3 million to a focus on real estate rather than productive investment.
More prison beds
Macron plans to add another 15,000 spots in France's prisons over the next five years.
“These kinds of decisions are too often made at the end of a mandate,” he told Le Figaro newspaper, promising “zero tolerance of delinquency as well as any excess in terms of police violence”.
Full reimbursement for some healthcare
If you suffer from chronic illnesses, or have trouble hearing or seeing, then Macron thinks you should be paid back in full for your medical care.
By 2022, he wants this to even include free dental care.
READ ALSO: Macron promises Nordic remedy for France's economic ills