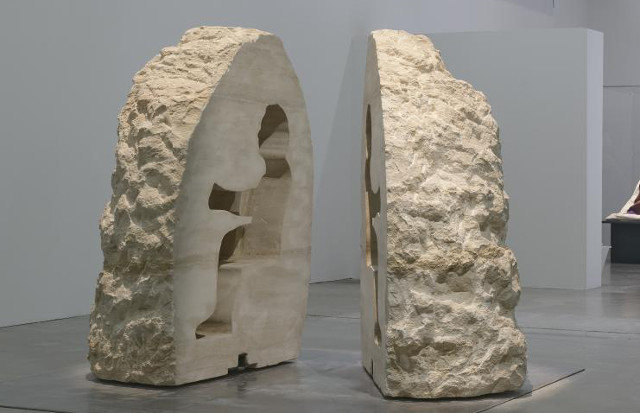 Abraham Poincheval, 44, had difficulty walking as he was helped from the stone onto a chair before being taken away for a medical examination.

“It is normal that I should feel a little stunned after spending a week inside a rock,” he told reporters half an hour later.

“I would like to thank it,” Poincheval added. “It made me so welcome.”

He had carved out a hole inside the rock in his own image, just big enough for him to sit up in, with a niche to hold supplies of water, soup and dried meat.

Poincheval's extreme performance in a Paris art museum has become something of a sensation in the French capital. Crowds thronged the Palais de Tokyo to watch him inside through an infra-red camera.

Hundreds tried to talk to him through a crack in the rock, with the artist telling AFP that some had read him poetry, played guitar or told him about their dreams and nightmares.

French extreme artist #AbrahamPoincheval locks himself inside a stone for a week. Curious? Visit and talk to him at @PalaisdeTokyo in Paris pic.twitter.com/jkzi1BceDv

But the artist, no stranger to bizarre and death-defying feats, admitted there were moments when the experience “shook” him — with “some huge moments when I lost myself.

“I had the feeling that I was just a particle inside this mineral world,” he said.

Sometimes he even felt he and the rock were one and the same.

“I felt I was a stone at the side of a path and at night I was a much wilder rock.”

Poincheval, who previously spent a fortnight sewn-up inside a stuffed bear, had earlier told AFP through a crack in the limestone boulder that his confinement had been “like tripping”.

“I am travelling in this rock without moving, like an astronaut,” he said, buoyed up by the fact that he had “got into people's heads”.

Dubbed France's most extreme artist, he will attempt to become a human hen later this month and hatch a dozen eggs by sitting on them for weeks on end.

Lack of sleep rather than claustrophobia was his biggest worry inside the darkness of the rock, he said.

Living with his excrement

Without a watch — and with only an emergency phone line — he had no way to tell the time.

The artist could only move his feet and hands a few inches, and had to store his excrement around him.

But he assured AFP at the weekend that there had been “no accidents” peeing into his empty water bottles.

Emotionally, however, his time inside was something of a rollercoaster, he
said.

“It's very complex. You pass from one feeling to an another. Like you are being carried away on a raft,” he said.

“It's like tripping. I am trying to explain (the feelings) in language but it is very difficult to put down in black and white.”

Poincheval is no stranger to bizarre performances.

He ate worms and beetles while living inside the stuffed bear, was buried under a rock for eight days and sailed France's Rhone river inside a giant plastic corked bottle.

He has crossed the Alps in a barrel, and last year spent a week on top of a 20-metre (65-foot) pole outside a Paris train station.

The artist also spent 20 days underground as a human mole, lived like a Stone Age man and had himself walled into a cave for a night with hundreds of mosquitos.

Unorthodox ideas seem to run in the family. His inventor father Christian, who sports a bowler hat and a white Santa Claus beard, is best known for coming up with pills that make farts smell of roses, violets and even chocolate.