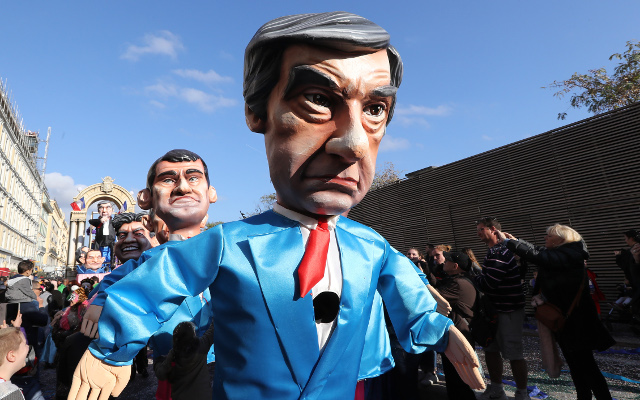 On Wednesday morning, François Fillon appeared out for the count, his election chances in ruins and his dreams of becoming the next president of France in tatters.

He had just cancelled a visit to the Paris farm show, a must for any candidate who wants to be French president, and then it emerged he would hold a hastily arranged press conference.

With reports that he and his wife were to be formally charged over the fake jobs scandal, rumours began to swirl that this would be the moment the conservative Fillon finally threw the towel in the ring, perhaps under pressure from his Republicans party who had decided that their man could not fight on.

But then to pretty much everyone’s shock, not least those writing his political obituaries, Fillon got up off the canvas and started throwing haymaker punches around, aiming swings at the magistrates and the press for trying to “politically assassinate” him.

“I won't give in, I won't surrender and I won't withdraw,” he said.

His rival, the rising star Emmanuel Macron, accused Fillon of “losing his nerve” but was probably secretly glad he had stayed in the fight, given polls suggest that he has gained the most from the fake jobs scandal.

Shortly after Fillon’s aggressive performance in front of the press, ally Bruno Le Maire quit his team, saying he could not support a man who had gone back on his word – Fillon had initially said he would quit the race if charged. Many voters would surely follow his lead.

Then the UDI party, an ally of Fillon’s Republicans, said it was meeting to decide whether it could continue to back the candidate, who only back in November was considered a shoe-in for the Elysée. It was then announced the party was cutting links with Fillon's campaign. Meanwhile Fillon headed off to the farm show to stroke some cows and get chased by a mob of journalists while crowds made it clear his future could go one of two ways. Some shouted “Fillon president”, while other shouted “Fillon en prison”.

Despite his determination, the candidate, who handsomely won the centre-right primary, now appeared a lame duck in a race increasingly dominated by the outsiders Marine Le Pen and Emmanuel Macron.

But it would unwise to rule out François Fillon just yet, even if he is clearly fighting an uphill battle to make it to the crucial second round of the election.

The first round is still over seven weeks away. That’s a long time in French politics in a normal year but it’s an eternity in this year’s remarkably unpredictable race.

In other words, Fillon still has time to pull off what would be a remarkable come back.

His big hope lies in the fact that despite the fake jobs scandal he can still call on a solid base of support and an electorate somewhat more accepting of politicians' wrongdoing than the UK or Scandinavia for example. Remember a recent poll by Cevipof think tank depressingly revealed that 75 percent of French people believe their politicians are corrupt and not honest.

While he has suffered in the polls, his support has hardly crumbled and remained between 18 and 20 percent, for the first round. That's a long way behind Le Pen (around 27 percent) but not Macron.

Fillon knows that the right-wing supporters, the same ones who twice elected a scandal-hit Jacques Chiraq in 1995 and 2002, will remain loyal to their candidate, no matter what.

Those supporters who have packed out his rallies are, like Fillon himself, convinced he is the victim of a political and media witch hunt, orchestrated by the government.

The right simply cannot bear the idea of losing an election that was considered only theirs to lose. Party big wigs know this, which is probably why they have stuck by Fillon rather than persuaded Alain Juppé or another right wing candidate to step forward. While those on the centre right won’t be tempted by either Marine Le Pen or the leftist Benoit Hamon and his plan to pay everyone a universal basic income, they are seduced by the maverick Macron, whose rise has been extraordinary.

But Macron has already shown he is vulnerable and his support is far from loyal.

After making statements about French colonisation – it was a “crime against humanity” and France’s anti-gay marriage movement – they were “humiliated – Macron tumbled swiftly in the polls.

Macron’s support is growing but it’s far from blind faith, as is the case for Le Pen and Fillon’s core support.

Plus there are suggestions the Russians are gunning for Macron in the hope undermining his campaign to the benefit of either Fillon or Le Pen, both open admirers of Vladimir Putin.

You get the feeling one scandal or damaging story for Macron could shift the momentum back in favour of Fillon.

There's also the possibility that unforseen events, such as the recent riots in the banlieues, the ongoing migrant crisis, or another terrorist attack could yet favour Fillon over Macron, who is portrayed as being soft on hot button issues of security, immigration and identity.

And remember, Fillon only really has to make the second round.

Once there and once up against Marine Le Pen, Fillon should emerge as the winner, perhaps not as convincingly as he would like, but the anti-National Front vote should still see him granted the keys to the Elysée. At least that's what the latest polls suggest.

Bookies in the UK are offering 4 to 1 odds on Fillon becoming president, behind the favourite Macron at 10/11 and Marine Le Pen, the second favourite at 9/4.