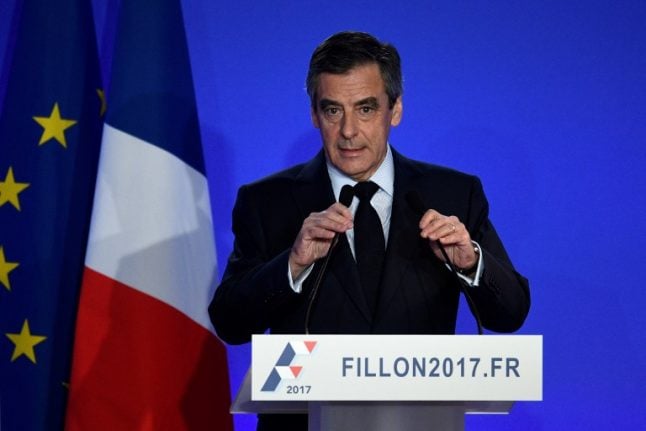 French presidential candidate Francois Fillon announced Wednesday that judges had summoned him to press charges over an expenses scandal but vowed to continue his campaign.

Fillon's announcement comes after magistrates opened an official judicial investigation into the allegations he misused public funds in connection to the fake jobs scandal surrounding his wife Penelope.

Conservative Fillon confirmed he and his wife were informed they would be placed under formal investigation (mise en examen) which is the closest equivalent to being charged, on March 15th.

Fillon said he would meet investigating magistrates on March 15 but denied all the allegations against him and firmly denied he would quit the race.

“I won't give in, I won't surrender and I won't withdraw,” he told a press conference on Wednesday.

Fillon lambasted the forces against him and once again proclaimed his innocence against allegations he misused public funds to pay his wife vast sums for a fake job.

“I don’t recognise the facts. I have not embezzled public funds,” said Fillon.

“I entrusted some parliamentary work to my relatives because I could trust them and they did assist me and I will prove it.”

“I have not been treated like an ordinary citizen,” said Fillon as he slammed the timing and speed of the investigation against him.

“It is indeed a political assassination. But it's not just me they are killing, it is also the presidential election itself.”

#Fillon taking a hell of a gamble, staying in race, knowing he will almost certainly still be under formal investigation election day.

#Fillon fights back. Placed under formal investigation but clearly in combat mode against what he sees as a manhunt operated by the Left

Welsh-born Penelope was paid over €800,000 before tax ($860,000) over three periods between 1988 and 2013 to act as an assistant to her husband and his deputy, but it is alleged she did little if anything to justify the salary.
Fillon also used public funds to hire two of his adult children when he was a senator, paying them 84,000 euros ($91,000) pre-tax between 2005 and 2007.
Fillon previously apologised to the French public for employing his family but stubbornly denied he had done anything wrong.
After initially suggesting he would stand aside if he was charged, he then changed his mind vowing the only people who could judge him were the French public in the upcoming election.
“Only universal suffrage and not a (legal) procedure can decide who will be the president of the Republic,” he said on Wednesday.
He blasted the Socialist government for allowing “a climate of near civil war” to develop around the election campaign.

After beating his rightwing rivals to clinch the nomination, Fillon was favourite to win the French presidency in the two-round election in April and May.

But the series of damaging allegations that he paid his family for fake jobs has seen him lose vital ground in the polls.

Recent surveys suggest that far-right leader Marine Le Pen and centrist candidate Emmanuel Macron are the two most likely to proceed to the second-round run-off on May 7.

Fillon has struggled with his campaign as his appearances were frequently attended by protesters supporting Communist-backed candidate Jean-Luc Melenchon.

Though employing a family member is not illegal in France, Fillon has struggled to provide evidence of Penelope's work, instead attacking journalists for trying to “lynch” him.

He has also accused Socialist President Francois Hollande of being behind the investigations in an attempt to influence the outcome of the vote, which would be illegal.

Despite difficulties on the campaign trail and attempts by a small number of rebel Republicans MPs to pressure Fillon to stand aside, the candidate has stubbornly refused to throw the towel in.