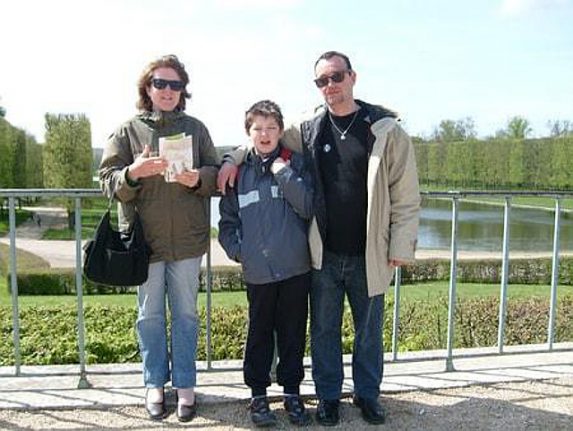 A photo of the family. Photo: Private
Bloodstains found in the house in a suburb of the western city of Nantes so far match the DNA of three of the four missing persons, prosecutor Pierre Sennes said late Monday.
The Troadec family — Pascal and Brigitte, both aged around 50, their son Sebastien, 21, and his sister Charlotte, 18 — have not been seen since February 16th.
Sennes said a probe has been opened into murder, abduction and illegal confinement in a case that has prompted lurid headlines.
Several reports recalled a murder in 2011 of five members of the same family, also in the Nantes area, noting that Sebastien attended the same high school as one of the victims.
The father, Xavier Dupont de Ligonnes, remains at large and is the suspect of an international arrest warrant.
Neighbours and a source close to the probe said Sebastien had had psychological problems and Pascal had suffered from depression in the past.
Sennes noted that Sebastien had been sentenced to carry out community service after being convicted in 2013, when he was a minor, for making death threats on his blog.
Home for the holidays
But classmates of Sebastien's interviewed by French media described a quiet, friendly youth, with one saying he was “always ready to help out”.
Both Sebastien and Charlotte had been at the family home during the just-ended school holidays.
Sennes said investigators had been unable to find Sebastien's car. The parents' car was parked outside the house.   The prosecutor said bloodstains were found throughout the two-storey house, including on Sebastien's cellphone and on Brigitte's watch, as well as efforts to wipe some of them away.
No toothbrushes or hairbrushes were found in the house, and the beds had been stripped, with some sheets drying on an indoor rack.
Food was going off in the refrigerator and there were dishes in the sink, Sennes said, adding that there had been no activity in any of the four family members' bank accounts, and their cellphones had not been activated since February 17.
Sebastien's cellphone was the last to be switched off, he said.
“It's as if the life of the house was frozen in time,” Sennes said.