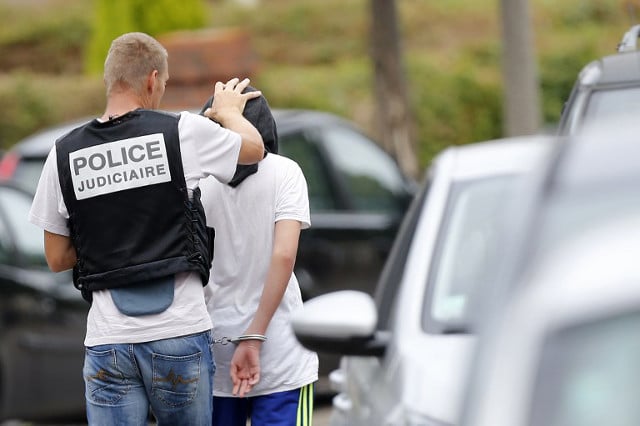 Archive Photo: AFP
Counter-terror police arrested the high school girls on Tuesday morning, judicial sources told L'Express newspaper.
At least one of them was planning an attack on French soil, according to the France 3 channel.
The girls were understood to have connections to French jihadist and chief terror plotter Rachid Kassim, who French and American authorities say was killed in an air strike in Iraq earlier this month.
The girls were understood to have been communicating with Kassim via the messaging app Telegram,. and were part of a group they called Les Lionnes (“The Lionesses”).
One of them, aged 19, was arrested in a raid at a property Creil, in the Oise department (see map below).
Another was arrested in the suburbs of Paris, while the location of the third raid remains unreported.
Kassim was a major concern for French anti-terror investigators after he was found to be in contact through the app with numerous people who have either carried out attacks in France or been arrested on suspicion of planning terror strikes.
He had appeared in several Telegram videos made in Syria and Iraq urging attacks in France.
Kassim is believed to have inspired an attack last year in which a senior French policeman and his partner were knifed to death and another in which an elderly priest's throat was cut as he said mass.
Investigators believe he also directed three women suspected of seeking to blow up a car packed with gas cylinders near Notre Dame cathedral in central Paris this month.
French authorities say they have solved numerous terror plots in recent months.
Only weeks ago arrests were made in the city of Clermont-Ferrand and Marseille over a suspected plot to attack Paris.