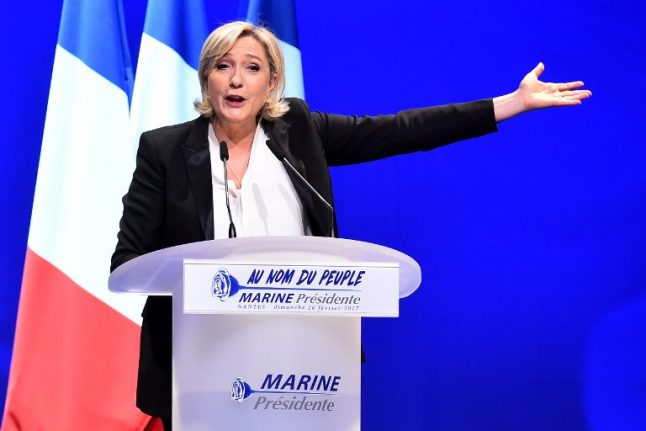 Photo: AFP
Le Pen, speaking at a rally in the western city of Nantes, launched a series of attacks on the 39-year-old independent who has emerged as a frontrunner to become France's next leader.
She accused the ex-economy minister of wanting to create a “migrant motorway” between France and north Africa, adding that “financial interests and their intermediaries in the media” had clearly taken his side.
In an attack that recalled US President Donald Trump's confrontation with journalists, she added: “The media have chosen their candidate. They are campaigning hysterically for their darling.
“They take the moral high ground, pretend to only analyse the facts and then shout about the freedom of the press as soon as you criticise them,” she said to cheers.
Two new polls published Sunday showed Le Pen still winning the first round of the election on April 23rd with 27 percent, but Macron closing the gap on her with 25 percent.
In the run-off vote set for May 7th, despite her belief that Trump's victory and Brexit point to a revival of nationalism and anti-elite movements like hers, Le Pen would lose by 20 points to Macron if it were held today, the polls suggested.
Analysts urge caution about making firm forecasts, however, after a series of political shocks in Western democracies in the last year and a string of surprises in French politics.
Favourable winds for Macron
The new polling was done immediately after Macron sealed an electoral alliance with fellow centrist Francois Bayrou last Wednesday — removing a potential rival just as increasing numbers of backers from the Socialist party and the centre-right are also trickling in.
Communist-backed candidate Jean-Luc Melenchon meanwhile ruled out striking a similar deal with Socialist Benoit Hamon, which the French left had hoped could allow them to mount a serious challenge.
“He confirmed to me what I already knew, which is that he is running,” Hamon told TF1 television Sunday night, announcing the setback after managing to secure a tie-up with environmentalist candidate Yannick Jadot.
Ex-banker Macron, who started his own political movement “En Marche” (“On The Move”) last April, has meanwhile started detailing his pro-business platform ahead of the official launch of his programme next Thursday.
On the right, Le Pen and Republicans party candidate Francois Fillon have become increasingly embroiled in legal problems.
Both are accused of misusing public money by using fake parliamentary aides, while Le Pen faces a separate investigation into the funding of election campaigns in 2014 and 2015.
An aide and a political ally to Le Pen were charged last week, while Fillon faces a full judicial inquiry into claims he paid his wife and children for fake parliamentary jobs.
Both deny wrongdoing and have sought to portray the investigations as politically motivated.
France 'submerged'
The build-up to Le Pen's speech Sunday was marred by violence when a peaceful demonstration against her on Saturday afternoon degenerated, leaving seven police officers injured.
And on Sunday, just before her speech, protesters sought to block several coaches that were transporting Le Pen supporters to the speech — burning tyres on the motorway, according to a police source, and throwing paint over one of the buses.
Le Pen went ahead with the rally and delivered a typical speech laced with criticism of France's political elite, globalisation, the European Union — and Macron.
In one passage she targeted what some observers see as his vulnerabilities, namely his pro-European sympathies at a time of widespread disaffection with
the EU project, as well as his openness to immigration.
“Mr Macron went to Germany recently to express the admiration he had for their decision to welcome 1.5 million migrants,” she said, referring to Chancellor Angela Merkel's open-door policy for refugees last year.
“French people can't put up with mass immigration any more!” she said, again to cheers from the crowd waving French flags.