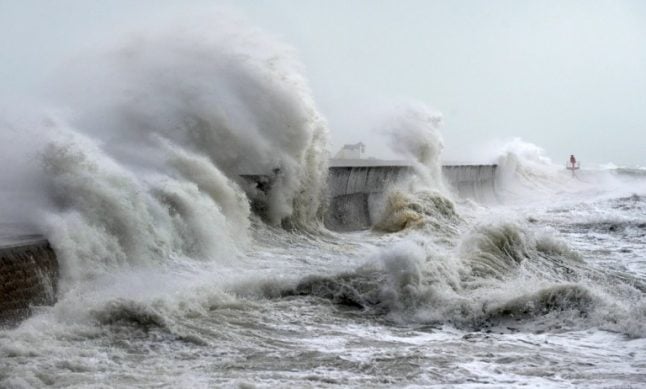 File photo: AFP
National weather agency Météo France has issued Orange weather warnings for seven departments – all on the west coast of France – for strong waves, high tides, and violent winds.
The rise in the sea level and the ensuing waves are due to a depression moving southwards from Iceland and past the British Isles, the agency added.
The departments on alert are: Charente-Maritime, Finistère, Gironde, Landes, Loire-Atlantique, Pyrénées-Atlantiques, and Vendée. An Orange alert is the second highest on the agency's scale and urged residents to be vigilant.
Those who live near the coast have been warned to keep their windows and doors closed and to stay away from the sea, including professional divers and fishermen.
The agency said there were risks of “severe and rapid flooding” along the coastline as well as in ports and the mouths of rivers.
It added that objects may be carried away by the water and that boats may be washed up onto dry land.
“Violent gusts of wind and heavy rains” may also cause structural damage, it added.
The alerts are in place until 9pm on Monday night.