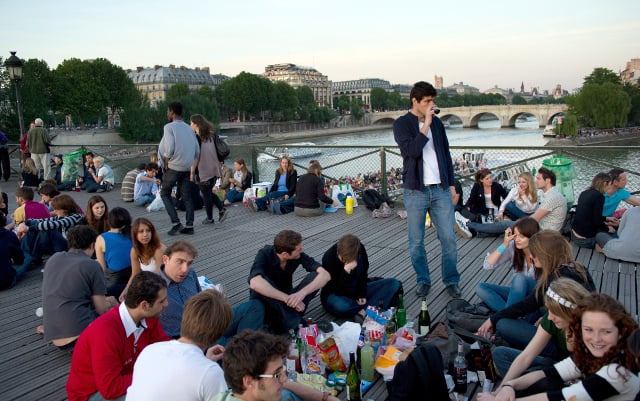 Photo: AFP
Dear Jim,
We heard that once, you wouldn't miss your annual trip to Paris “for anything”.
But now your friend Donald Trump said you don't even think about visiting anymore, because according to you “Paris is no longer Paris”.
Why would you tell the US president something like that, Jim?
Paris IS still Paris.
Yes, the city still offers the best people watching on the planet. The streets of Montmartre remain gloriously cobbled, and the complete craziness of the roundabout around the Arc de Triomphe is still avid viewing from the top. Photo: Cyberjunkie/WikiCommons
The Seine is still full of water and still home to countless Bateaux Mouches tour boats full of tourists waving madly to people on the bridges. And the Parisians still don't wave back.
Paris still even smells the same: a semi-toxic but highly addictive blend of baked baguette, cigarettes traffic fumes and the occasional whiff of street pee.
And it still sounds like the last time you came: car horns, rickety scooter engines, impatient cyclists ringing their bells, police sirens and the subtle but distinct sound of locals stirring their coffee. Photo: Steven Scheffler/Flickr
And yep, it still tastes the same. The fine food, the fine wine, the freshly baked croissants, and the cold beer on a terrace. It's all still here.
But not only that Jim. The city is even getting better.
They're giving the Gare du Nord train station (you know, the one that smells of urine that you probably got lost in last time) a paint job and they're bringing in an express train line from Charles de Gaulle airport to the city, and they're even considering bringing in flying taxis for the Seine River. Honestly that is not fake news.
In fact the variety of restaurants has got far better since you last came. As well as classic French brasseries, you can find Thai restaurants, Mexican, Japanese, Chinese, Korean, Ethiopian, Cambodian, Vietnamese and if you like to feel at home then there's always McDo. Or Burger King, or even Five Guys for that matter. Man, there's even an American Diner for you. OK it's still tough to dodge the dog poo that has forever been left behind on the city streets, but authorities are taking on the rogue dog owners.
The famously grumpy Parisian waiters are even getting taught to be more polite to tourists. The Metro is being extended and it's soon going to have 4G internet coverage believe it or not.
They even have shops open on Sundays now, they are cracking down on polluting cars and those horrible love locks are on the way out. The start-up scene is hugely successful, bankers may soon be quitting London for Paris and even the coffee is getting better.
And would you believe, Jim, that high school students are still protesting in the street and blocking their schools with bins and getting involved in scuffles with police. You see Jim, Paris has hardly changed since 1968. OK, OK, it's not all better.
There are still locals who park like this, for example, and this may never change.

Photo: mokapest/Flickr
Unfortunately, there were fewer tourists in Paris last year, with many probably scared off by the recent terror attacks but also no doubt by all the ridiculous fake news stories being spouted out about Paris no go zones.
Chris Ryan who lives in Barbes, one of those so-called no go zones has a message for you: “The streets of Barbes are changing. This 'highly dangerous no-go-zone' has also seen many trendy restaurants, craft beer stores and cafés move in, as well as countless retro clothing shops and even a hipster hair salon! I heard a fresh juice shop is also moving in soon. And a cheese producer and the Goutte d'Or brasserie.
Yes, some people are scared, but don't feel like you have to be among them, Jim.
As the weather gets warmer, the locals are emerging from their winter hibernation. This past weekend saw business as usual at the beautiful parks around the city. There's no better time to be in Paris than when the sun's out Jim. Photo: AFP
Fair enough, Jim, there are soldiers dotted around some schools, churches, and tourist spots. But you get used to them. They'll even say Bonjour to you as they walk past.
You might have to have your bag searched at a museum or have a security guard wave a wand at you, but that's no reason to be scared Jim.
Now look, there have been some recent riots in the suburbs but these areas are not really tourist hot spots Jim, so you're unlikely to end up there. And they were in anger over a police officer “accidentally” inserting his baton in a man's anus. They weren't anti-Jim protests. You know, many tourists are getting smart about the fact that the (hopefully temporary) drop in visitor figures means cheaper flight prices, emptier hotels, and shorter queues at the tourist attractions.
They're laughing all the way to the top of the Eiffel Tower.
Danish tourist Jens Peter Frahm-Hansen told The Local recently that he wasn't deterred from visiting the city.
“The sun is the same everywhere, but Paris is Paris,” he said, using almost the opposite choice of words to you, Jim.
The Dane is right! Even though earlier this month there was an attack on soldiers near the Louvre museum, the very same museum has said this week that their new Vermeer exhibition has proved so popular that they've had to shut down their online reservation portal. A file image of a busy day at the Louvre. Photo: AFP
And lastly, Jim, the mayor of Paris Anne Hidalgo has pointed out that it's unfair to bring down Paris like your friend Trump has done.
“No one points out that a lot of crime in big US cities linked to the open sale of guns is a plague that takes many lives,” she said.
“There is a risk of terrorism in all major cities,” she added on Monday. “But Paris is doing well, Paris is a resilient city.”
She is right. Paris is resilient, Paris is still Paris, even after what happened last November.
Remember the city's motto, Fluctuat nec mergitur (“Tossed by the waves but never sunk”.)
These words worth remembering before giving up on a city like Paris.
Thanks for your time, Jim. Oh, and watch the video below.
The Local France