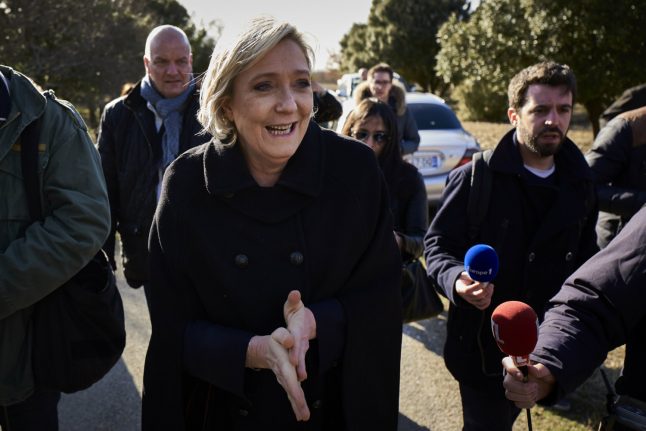 Front National presidential candidate Marine Le Pen visits a truffle farm in central-eastern France on February 24, 2017. Photo: Jean-Philippe Ksiazek/AFP
The independence and neutrality of the justice system is under scrutiny ahead of a two-stage presidential election only nine weeks away amid several high-profile probes into Fillon and Le Pen.
Both are accused of misusing public money by using fake parliamentary aides, while Le Pen faces a separate investigation into the funding of election campaigns in 2014 and 2015.
They deny wrong-doing and have sought to portray the investigations as politically-motivated attacks which should be delayed or abandoned altogether.
“Imagine that during the presidential campaign you can't investigate?” Justice Minister Jean-Jacques Urvoas told the Journal du Dimanche newspaper.
He said that in the past judges had sometimes taken into account the electoral calendar when fixing trial dates, but that judicial investigations had never been put on ice.
“There is no law allowing a suspension like that. What would be the reason? In the name of what exception? In my opinion, nothing could justify it,” he said.
He again denied accusations that Socialist President Francois Hollande was behind the investigations as has been alleged by Fillon, whose campaign has been thrown into turmoil by the case.
“To imagine that investigations could have been ordered on Fillon or Marine Le Pen is completely absurd because it's illegal,” he added.
Polls currently show anti-EU, anti-immigrant Le Pen winning the first round of the two-stage election on April 23, with either Fillon or centrist candidate Emmanuel Macron coming second.
In a run-off vote on May 7 between the top two candidates, Le Pen would lose to both of her rivals if the vote were held today, polls show.
On Saturday, legal sources told AFP that a confidant of Le Pen has been charged with making an illegal loan to her far-right National Front party.
Le Pen's personal assistant Catherine Griset was charged on Wednesday with breach of trust in a probe into allegations the party defrauded the European Parliament of about 340,000 euros ($360,000).
Fillon meanwhile faces a fraught two months ahead of the vote after French prosecutors' decided on Friday to launch a full judicial inquiry into claims he paid his family for fake parliamentary jobs.
Fillon, who was previously leading the race as the rightwing standard-bearer, will be investigated by three magistrates over allegations of embezzling public funds and misappropriating corporate assets.
An editorial in Le Parisien newspaper on Saturday said the move from a preliminary probe to a full investigation represented a “surge in the pressure” on the 62-year-old former prime minister.
The devout Catholic won the conservative nomination by campaigning as a “clean” candidate unsullied by the scandals of his rivals.
Since January he has been fighting claims by Le Canard Enchaine newspaper that he used allowances to pay his British-born wife Penelope at least 680,000 euros ($720,000) over some 15 years as a parliamentary aide.
Although French lawmakers are allowed to employ family members, it is unclear what work Penelope did and she did not have a pass for the parliament building.
Lawyers for the couple said they were confident the investigators would find them “innocent, at last”.
Fillon's lawyers have called the probe an abuse of process and the candidate himself has attacked Hollande in harsh language, accusing him of being behind an “institutional coup.”
Url copied to clipboard!