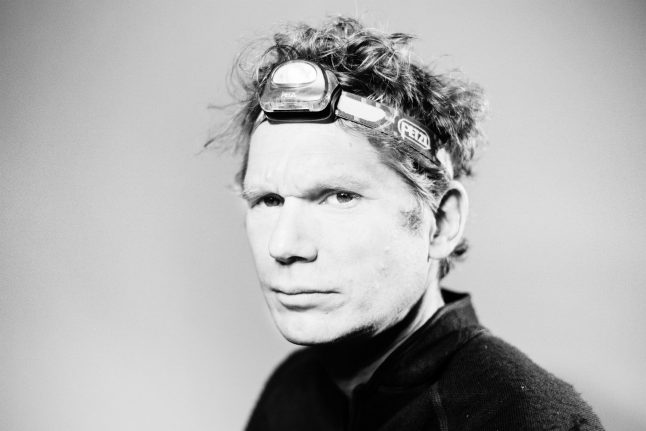 French performance artist Abraham Poincheval. Photo: Joel Saget/AFP
Speaking to AFP through a crack in the limestone boulder late Friday, Abraham Poincheval said he had been buoyed by how his performance has “got into people's heads”.
The artist made headlines worldwide when the two halves of the rock closed around him on Wednesday at a Paris art museum.
Poincheval, 44, had carved out a hole inside the rock in his own image, just big enough for him to sit up in, with a niche to hold supplies of water, soup and dried meat.
“People seem to be very touched. They come and talk into the crack, read poetry to me, or tell me about their nightmares or their dreams,” he said.
“They are not so much talking to me, I think, as to the stone. I am very happy that the stone has got into their heads.”
If he survives the ordeal, the performance artist who has previously spent a fortnight sewn-up inside a stuffed bear, will attempt to become a human hen and hatch a dozen eggs by sitting on them for weeks on end.
Lack of sleep rather than claustrophobia is his biggest worry inside the darkness of the rock, he confessed.
Without a watch – and with only an emergency phone line – he has no way to tell the time.
“I can sleep but it is very hard. It is very strange, I don't know whether I am sleeping well or not.”
Even though he can only move his feet and hands a few inches, “I do not feel oppressed (by the rock), I feel completely at ease, in real connection with it.
“Right now, it's sweet. Like when you are starting to climb a mountain. But I know it will get difficult,” said Poincheval, who is having store his own excrement around him.
“For now, it is OK,” he said, adding there had been “no accidents” peeing into his empty water bottles.
“We are already locked into our own bodies,” the artist told AFP minutes before climbing inside the rock at the Palais de Tokyo to become what he called the boulder's “beating heart”.
However, he admitted that emotionally, his time inside has been something of a rollercoaster.
“It's very complex. You pass from one feeling to an another. Like you are being carried away on a raft,” he said.
“It's like tripping.”
To keep a hold on himself, the man dubbed France's most extreme artist has been keeping a diary, which he will later publish.
Poincheval is certainly no stranger to bizarre and hair-raising performances.
He ate worms and beetles while living inside the bear, was buried under a rock for eight days and navigated France's Rhone river inside a giant plastic corked bottle.
He has crossed the Alps in a barrel, and last year spent a week on top of a 20-metre (65-foot) pole outside a Paris train station.
The artist also spent 20 days underground as a human mole and lived like a Stone Age man with his former sidekick Laurent Tixador on a small rocky island in the Mediterranean off the southern city of Marseille.
The pair also walled themselves into a cave for a night with hundreds of mosquitos and crossed France in a straight line on foot.
Poincheval's big dream, however, remains to “walk on the clouds. I have been working on it for five years, but it is not quite there yet,” he added.
Unorthodox ideas seem to run in the family.
His inventor father Christian, who sports a bowler hat and a white Santa Claus beard, is best known for coming up with pills that make farts smell of roses, violets and even chocolate.
The artist said his spirit of adventure comes from a child-like love of exploration.
He said his own children, aged six and eight, “are still young enough not to think it weird that I am going off to go live in a rock or inside a bear.”
As Poincheval finished speaking, a nine-year-old girl called Daria shouted through the crack to tell him that she had been allowed to come and see him for her birthday.
“I am a fan,” she added. “What he does is really cool.”