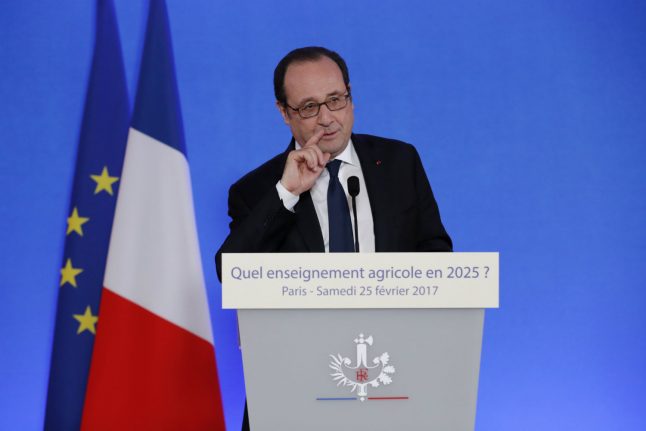 French President Francois Hollande speaking at the International Agricultural fair in Paris, on February 25, 2017. Photo: Christian Hartmann/AFP
“It is never good to show the slightest mistrust towards a friendly country,” Hollande said.
“That is not what I do toward a friendly country and I ask the American president not to do it to France,” he said at the opening of the annual agricultural fair in Paris.
Seeking to defend his controversial crackdown on immigrants, Trump criticised long-time allies France, Sweden and Germany.
“Take a look at what's happening in Sweden. Take a look at what's happening in Germany. Take a look at what's happened in France. Take a look at Nice and Paris,” he told conservatives at a rally outside Washington on Friday.
Trump trained his sights on Paris in particular, recounting the story of a friend who used to visit every year.
“I have a friend, he's a very, very substantial guy. He loves the City of Lights,” he said.
After not seeing his friend for a few years, Trump asked him how Paris was, quoting him as replying: “'Paris? I don't go there anymore. Paris is no longer Paris.' That was four years, four or five years, he hasn't gone there.”
Asked about the comments, Hollande said Trump had recently told him in a telephone conversation of his “love” for Paris and France.
“So I imagine that that is what he thinks. If it is what he thinks, I expect he will express that.
“Fortunately, for several months American tourists have returned in large numbers because they see” that French authorities are making “a considerable effort to ensure security.”
“And I don't want to make a comparison, but there are no weapons circulating here, there are no people who take weapons to shoot into the crowd”, he said, in a reference to the tighter gun control measures in France than the US.
Fears linked to terror attacks have scared off visitors to Paris in the past two years.
In November 2015, 130 people were killed in Paris when gunmen and suicide bombers from the Islamic State jihadist group attacked bars, restaurants, a concert hall and the Stade de France national stadium.
That attack came 10 months after two jihadist gunmen shot dead cartoonists and journalists at the Paris offices of satirical newspaper Charlie Hebdo.