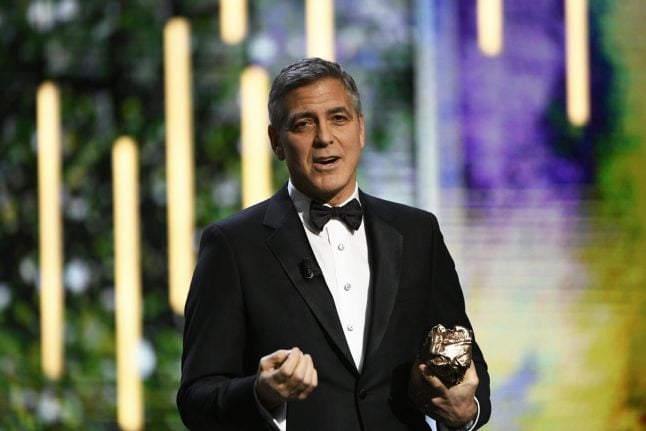 George Clooney speaks on stage at the Cesars. Photo: Bertrand Guay/AFP
“Courage trumps fear. Right always trumps might,” the American actor said before quoting war reporter Edward F Morrow's famous condemnation of the McCarthyite Communist witch-hunts of the 1950s.
“Let's not confuse dissent with disloyalty. We must not walk in fear of one another, we must not be driven by fear into an age of unreason,” he said.
Watched by his wife, the human rights lawyer, Amal Clooney, who is pregnant with twins, the actor said, “We cannot defend freedom abroad by deserting it at home.
“We have to work harder not to let hate win,” insisted Clooney, who was a supporter of Democratic Party candidate Hillary Clinton, as he received an honorary Cesar.
“Elle”, a subversive thriller about a woman who not only takes revenge on her rapist but holds him in her power, won best film and Huppert, 63, the best actress award.
Her mesmerising performance in such a slippery and morally complex story has won her some of the best reviews of her career, and made her one of the favourites for the best actress Oscar on Sunday.
Another French Oscar contender, “My Life as a Zucchini” (“Ma Vie de Courgette”), won best animated film.
With France's troubled suburban estates again rising up in protest after two high-profile police brutality cases, “Divines”, a stirring story of the friendship between two young girls from immigrant families, also triumphed.
Deborah Lukumuena won best actor in a supporting role while co-star Oulaya Amamra wept as she dedicated her best newcomer award to her late father.
Her sister, director Houda Benyamina, took the prize for best first film, after winning the equivalent prize at Cannes.
The highly-political winner of that festival's Palme d'Or top prize, “I, Daniel Blake”, also got the Cesar for best foreign film.
Its veteran British director Ken Loach used the occasion to again accuse his country's Conservative government of “deliberate brutality” towards the poor.
The moving drama tells of a carpenter's Kafkaesque struggle to get benefits after suffering a heart attack and being told by doctors he can no longer work.
And the young director of the best documentary prize, Francois Ruffin, also used his speech to excoriate French politicians for allowing manufacturing jobs to be delocalised to low-wage countries.
His fiercely comic film “Merci Patron” (“Thanks Boss”) skewered France's richest man, Bernard Arnault, the owner of the LVMH luxury goods empire, and was one of year's surprise hits.
The night's other big winner was Canadian wunderkind Xavier Dolan's hot-tempered family drama “It's Only the End of the World”, which featured an A-list cast of French stars.
It won the 27-year-old best director, best editing and its star Gaspard Ulliel best actor.
Url copied to clipboard!