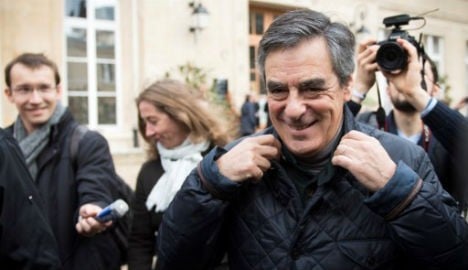 Fillon, one of the frontrunners in the presidential race, will be investigated for alleged embezzlement of public funds and misappropriation of corporate assets, prosecutors said in a statement.

The 62-year-old former prime minister has not been charged at this point, but under French law investigating magistrates can decide to bring charges.

With the first round of the election just two months away, on April 23, the timing of the magistrates' decision could have a crucial bearing on the race.

Fillon has been fighting claims first made a month ago by Le Canard Enchaine newspaper that he used allowances to pay his British-born wife Penelope at least 680,000 euros ($720,000) over some 15 years as a parliamentary aide.

She is accused of having barely worked for the salary. Two of Fillon's children were also put on the parliamentary payroll for brief periods.

The Canard Enchaine alleged that Penelope Fillon was also paid tens of thousands of euros by a literary review, the Revue des Deux Mondes, owned by billionaire Marc Ladreit de Lacharriere, a friend of her husband.

That allegation refers to the accusation of misappropriating corporate assets.

Prosecutors said the three investigating magistrates named to handle the case will also look at whether Fillon failed to declare the necessary information to parliamentary authorities.

Lawyers for the couple said they were confident the magistrates would find they were innocent.

The Fillons have argued that Penelope was legitimately employed as his parliamentary aide and the lawyers say they given investigators proof of the work she did.

But French TV later broadcast an interview that Penelope gave to a British journalist in 2007 in which she said she had never been her husband's assistant.

Fillon has dismissed the claims as politically motivated but he acknowledged last weekend that his presidential bid had become “difficult”, with hecklers often massing at his campaign stops.

He was giving a campaign speech in Maisons-Alfort, to the east of Paris, when it was announced he would face investigation by magistrates.

The claims had taken a toll on Fillon's standings in the polls, but this week surveys showed he had regained ground and was neck-and-neck with 39-year-old centrist candidate Emmanuel Macron as they fight for second place.

Marine Le Pen, the leader of the far-right National Front (FN), is forecast to win most votes in the first round. But polls currently show she would be beaten by either Fillon or Macron in the all-important runoff on May 7.