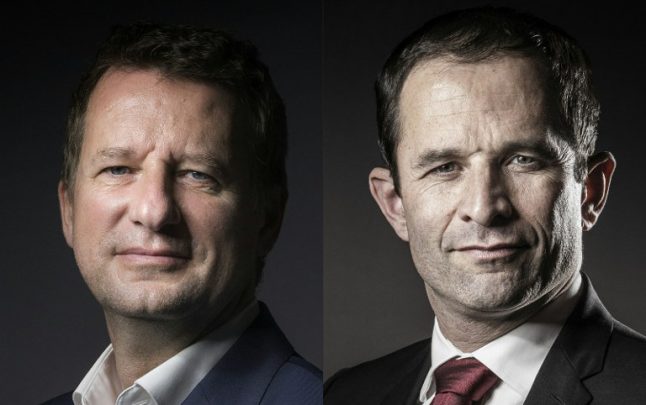 Environmentalist Yannick Jadot and Socialist candidate Benoit Hamon. Photo: AFP
Environmentalist Yannick Jadot dropped out and threw his support behind Hamon, while Communist-backed Jean-Luc Melenchon said he was “open to discussion.”
Polls show the three have enough supporters to mount a serious challenge together, which means a potential tie-up between the splintered leftist candidates could produce more uncertainty in the race.
Jadot, a former Greenpeace director, made the announcement after being credited with winning only two percent of the vote, according to the latest opinion polls.
“My responsibility is to overcome egos… and create a new adventure in this election,” the 49-year-old told France 2 public television.
“This evening I am withdrawing my candidacy,” he said, speaking of a “terrific” deal with Hamon.
Unpopular Socialist President Francois Hollande decided not to run for re-election after a five-year term marked by terror attacks and stubbornly high unemployment.
Both the Republicans and the Socialist parties discarded the most obvious candidates when choosing their nominee in primary votes.
Under fire Socialist candidate and former prime minister Francois Fillon was the frontrunner in his party but has come under a cloud over allegations that he supposedly paid his wife money for parliamentary work she did not do.
Hamon, who is credited with winning between 13 to 15 percent of the ballots but will not make it to the run-off voting round in May, according to the latest polls, welcomed the announcement.
He said Jadot's backing would help “prepare for the great ecological conquests of tomorrow.”
Hamon has tried to woo Melenchon also to drop out of the race and give the left a chance of staying on in power but left-wing stalwart has so far refused to do so.
Melenchon however late Thursday said he was “not closing any doors” and that he was ready to meet Hamon on Sunday or Monday if he so wished.
“I am open to discussion,” he said.
Telegenic former economy minister Emmanuel Macron has emerged as the head of the centre after an alliance with veteran centrist Francois Bayrou who dopped out of the race on Wednesday.
The 39-year-old Macron has however lost ground in recent days to his far-right rival Marine Le Pen.
The 48-year-old Le Pen is projected to win between 25 and 27.5 percent of the vote if the election were held now but forecast to lose in the second round on May 7.