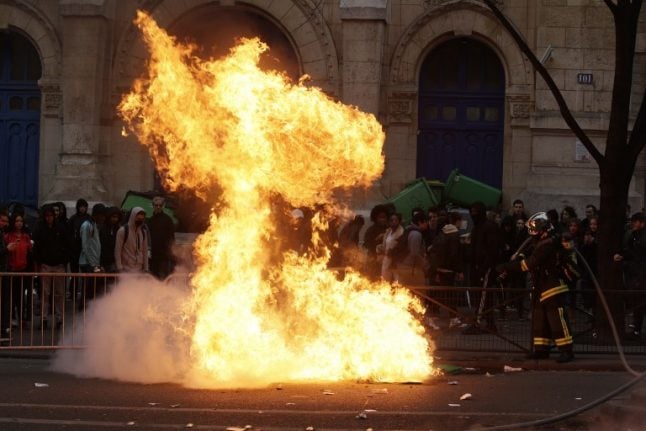 All photos: AFP
Tensions flared on Thursday morning as high school pupils clashed with police officers in different areas of the city.
Witnesses outside the Lycée Voltaire in the 11th arrondissement said police used tear gas to control the crowds, as pupils took to torching plastic container bins in the middle of the road. Earlier in the morning, pupils used the bins to block off the entrances to around a dozen high schools in the capital.
Disturbances were reported at 15 high schools in total, the police said.
The students were rallied together on social media via the extreme left group Mouvement interluttes indépendant, in protest against police violence.
By around midday hundreds of pupils had gathered at Nation for a protest, the police described as illegal because it had not been given the green light.

Another aggressive clash between protesters and police at Nation (protest against police aggression). pic.twitter.com/5Usq57xHoh

It flared up in Nation over the anti-police protests and police tear gassed the crowd of high schoolers. pic.twitter.com/gmCIwD6299

“The police are meant to be here to protect us, not to be aggressive towards us,” a 16-year-old who preferred not to be named told The Local.
He added that while he had never personally been the victim of police violence, he said he knew of others who had.
“The reason we are here is to show solidarity with Theo,” a 15-year-old added, referring to the alleged “baton rape” of a young man in the suburbs earlier this month.
“What the police did to Theo was unacceptable. I don't even have the words to describe how that made me feel,” a 15-year-old added.

There have been several similar high profile protests, mostly in the suburbs of Paris, ever since the alleged “baton rape” of a young man in the Paris suburbs at the beginning of the week. Witnesses told the L'Express newspaper that students were throwing projectiles including eggs, as well as blocking off the entrances to the schools.