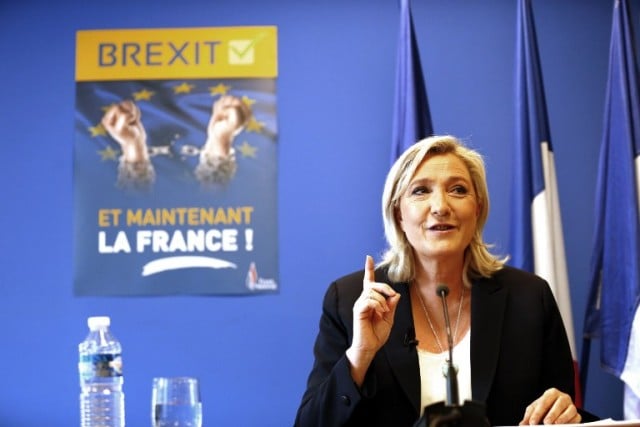 Euros and francs. Photo: AFP
Leaving the Eurozone and reverting to the currency of the French franc would be a costly move indeed, at least according to a study this week from the French think-tank Institut Montaigne.
The study found that the switch could cost the country over €180 billion on its GDP and see the end of up to half a million jobs in the long term.
“The number of jobs destroyed by this measure could be tens of thousands in the first year and could easily top 500,000 in the long term,” the study authors wrote.
“In total, in the long term, the cost of such a measure would be around €7,000 per employed resident in France.”
The study predicted a hit to France's GDP, or the wealth created by the country, of between 0.6 and 3.2 percent in the first year alone.
An optimistic prediction for the long term saw a 4 percent drop in GDP, while it could be as high as 13 percent in unfavourable circumstances (see graph below).
Researchers predicted a 9-percent GDP hit over the long term.

Le Pen responded to what she referred to as a “delirious” study on the TF1 channel on Wednesday night, calling into question the independence of the Institut Montaigne.
She pointed out that the institute had links to two of her main opponents, Francois Fillon and Emmanuel Macron.
But the problem for Le Pen is that the Institut Montaigne are not the only ones forecasting a disastrous economic future for France if she ditches the euro currency.
Analysts for Deutche Bank said France scrapping the euro would run the risk of creating a crisis worse than the fall of Lehman Brothers in the United States.
The analysts warned against comparing Brexit to any kind of potential Frexit which would have far worse consequences on the EU.

“Make no mistake, there is the world of difference between tearing up bilateral and multilateral trade agreements, and, unwinding a monetary union as far reaching in scope as the EMU (economic and monetary union) project,” Deutsche Bank said in a note Tuesday.

“It is the difference between a benign global risk event and something that has the potential to go beyond a 'Lehman's moment'.”

The European Monetary Union would become a “nightmare”, the bank said.

Le Pen has promised to bring France out of the Eurozone if she is elected in the upcoming elections, as well as clampdown on immigration.
She has been leading the polls for the first round of voting, which will take place in April, but she is widely tipped to be defeated in the second round in May.
READ ALSO: French First – This is what a 'President Marine Le Pen' has in mind for France