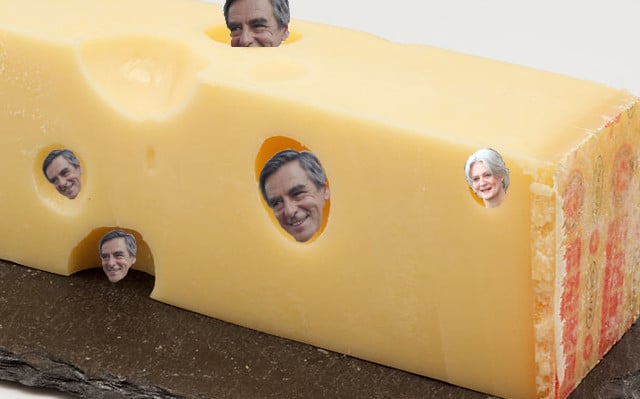 Sometimes it's just easier to really understand politicians when they are compared to French cheeses.

No, we’re not calling Madame Le Pen a “laughing cow” as the name of this famous French cheese suggests. Photo: Ludovic/WikiCommons and AFP
La Vache Qui Rit spreadable cheese is not one that many French people would admit openly to liking, just like Le Pen herself perhaps, but nevertheless it remains far more popular than you'd believe and like the Le Pen family has stood the test of time.

The fact the cheese comes in a shiny wrapper with a friendly laughing cow on the front could be an analogy for the National Front. While Le Pen has given the party a softer more polished image in recent years, many suggest what's behind the wrapper is far from refined.

And every year we seem to ask ourselves why do so many French people eat La Vache qui Rit and who are they, exactly?

You could also argue that the cheese itself is tasteless, like some of Le Pen's comments over the years. Now why would we choose a holey cheese for François Fillon?

Yes partly because he is a devout Catholic but mainly because let's face it, his story of how he ended up paying his wife hundreds of thousands of euros in public money to be his parliamentary assistant (correct a few speeches and greet a few people) has more holes in it than, well, an Emmental cheese.

Holes in cheese were historically a sign of imperfection. Sorry François but that's how many French voters feel about you right now.

And like this somewhat rubbery French cheese, his excuses have been hard to swallow and are starting to grate.

And apparently the Russians go mad for Emmental too, albeit the Swiss version because can’t get their hands on the French version due to sanctions. But Fillon’s well-known pro-Russian stance should melt any Franco-Russian hostilities. Photo: Thesupermat/WikiCommons and AFP
The famous Brie de Meaux is never put through the pasteurisation process, a little like Emmanuel Macron not having been through the electoral process in France, until now that is.
Like Brie de Meaux, Macron has a thin skin (or rind) and a soft centre, perhaps too soft for the harsh world of a French presidential campaign, which requires a thick rind.

But who doesn’t like Brie? Brie appeals to everyone, both left and right and is also popular overseas, however that means its relatively inoffensive taste can make it a little bland for some.

Sometimes called “The King of Cheeses”, Brie has grand pretensions. Like young Macron, who said France hasn’t had a real leader since the Revolution.

And like the former banker, Brie cheese is rather rich and goes well with an aged wine. With Benoit Hamon, and Camembert, you never really know what you are going to get until you open the box.

You can read what it says on the packaging, but you don’t quite know what you’re going to get until you give that Camembert the chance to breathe.

Hamon was only really known as a former minister of education and an obscure Socialist rebel, but let him out of his box in the Socialist primary and he surprises everyone with his easy to digest plan for universal basic income, a 32-hour work week and a tax on robots.

Suddenly that strong smell is overpowering all of the other cheeses in the fridge.

But needless to say his plan to legalise cannabis led to him being accused of having a soft centre. Camembert is often described as an earthy cheese, and Hamon is easily the greenest of all the candidates. He’s a burn-the-roof-of-your-mouth firebrand and it's all about sharing for this far-left socialist/communist.

But he can get quite overpowering and, like a fondue, some of his ideas like a big hike in the minimum wage and introducing more referendums and renegotiating EU treaties can seem appetising at first but end up a little hard to digest in reality.

Let's face it, come election time in April and May, what tasted good in winter will hardly be popular anymore.