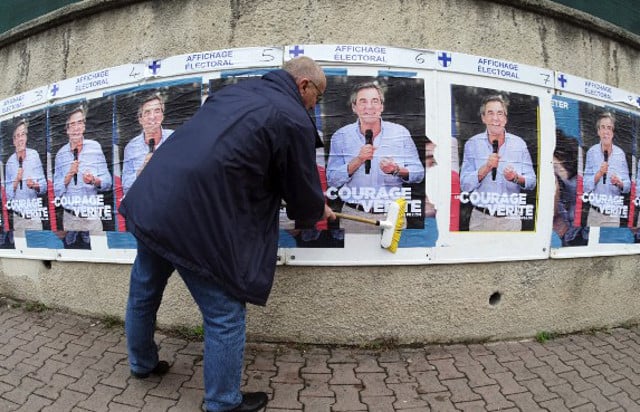 Macron, a 39-year-old former economy minister, was given little chance when he launched a new political movement “En Marche” (On the Move) last year ahead of a vote that was billed as a fight between conservatives and the far-right.

But the pro-European progressive is now a frontrunner to become France's next leader and will draw fresh strength from an alliance with veteran centrist Francois Bayrou, who decided against mounting a rival presidential bid on Wednesday.

The two were to meet on Thursday afternoon, with Macron hoping the tie-up between them will boost his chances after a tricky 10 days that have seen him lose momentum just as far-right candidate Marine Le Pen picks up speed.

Bayrou acknowledged that Macron was in a “bit of a difficult spot” on Thursday as he announced their alliance aimed at ending a post-war lock on French politics enjoyed by mainstream parties.

“The feeling he had, I think, was that it was an important moment for him, but not only for him, for changing the political life of France,” Bayrou told RTL radio. Macron's unforeseen rise illustrates the difficulty in forecasting this year's two-stage election on April 23 and May 7 which is being widely watched by governments and investors around the world.

“It might be that we only see what's going to happen on the night of the election,” veteran French political watcher Philippe Braud, an emeritus professor at Sciences Po university, told AFP on Thursday.

The surprise alliance with Bayroucame after several other shock moments in the election race including defeats for veteran right wingers Nicolas Sarkozy and Alain Juppé, François Hollande's decision not to run, his former PM Manuel Valls losing the Socialist party primary to the dark horse Benoit Hamon and the fake jobs scandal that almost put François Fillon out of the race.

Two new polls on Thursday showed anti-EU far-right leader Le Pen stretching her lead in the first round, where she would win 25-27.5 percent if it were held now.

The 48-year-old, who will give a speech later Thursday about her foreign policy priorities, is still forecast to lose in the second round — but she appears to be closing the gap.

The most likely winner is therefore either Macron or Francois Fillon, the long-time favourite and conservative candidate for the right-wing Republicans party.

But the unstable international background — from Donald Trump and Brexit to the surge of right-wing nationalism — is mirrored by an anti-establishment and angry mood in France.

Unpopular Socialist President Francois Hollande decided not to run for re-election in December after a five-year term marked by a series of terror attacks and high unemployment.

Both the Republicans and the Socialist parties overlooked the most obvious candidates when choosing their nominee in primary votes.

And Le Pen and Fillon both face investigations into their use of allegedly fake parliamentary aides which could have consequences between now and election day.

Fillon was described as “completely lost” by former rightwing president Nicolas Sarkozy after the two men lunched together last week, according to a report in the Canard Enchaine newspaper.

A final election twist, largely overlooked until recently, is the potential for a tie-up between the splintered leftist candidates which could produce another upset.

“Benoit Hamon has reached out to Jean-Luc Melenchon, he's even reached out to Yannick Jadot,” the spokesman for the Socialist government, Stephane Le Foll, told France 2 television on Thursday.

France's Socialists are still haunted by the 2002 presidential election when their divisions led them to be knocked out in the first round, with far-right leader Jean-Marie Le Pen — Marine's father — going through to the run-off. A leftist alliance would make Macron's route to the presidency more difficult, but he can still claim to be the only centrist in the race.

His platform — set to be announced fully on March 2 — is more pro-business and reform-minded than his leftist rivals who have large tax-and-spend programmes.

He is also instinctively pro-European and at ease with multiculturalism in France, whereas Fillon and Le Pen have railed against the threat to French identity posed by Muslims in particular.

But the ex-banker remains inexperienced, having served only two years as an economy minister and the same amount of time as a political advisor to Hollande.

He was forced to backtrack last week during a visit to Algeria where he talked about France's 130-year colonial rule there as a “crime against humanity,” leading to fierce attacks from his rightwing rivals.