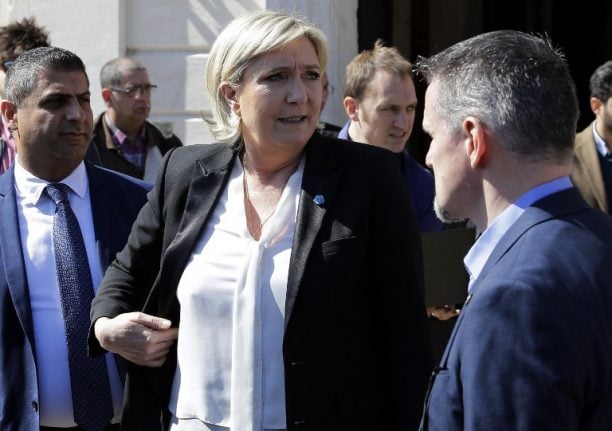 Photo: AFP
Few things seem to stop French far-right leader Marine Le Pen from rising in the polls. Not investigations for fraud and hate speech, attacks by opponents nor warnings from experts about her programme.
Will a new, highly critical film nine weeks before the presidential elections make a difference?
“Chez Nous” (“This Is Our Land”), which hits screens Wednesday, depicts the political career of a nurse who stands in local elections for a far-right party called the Patriotic Bloc.
The plot makes few efforts to disguise its core message about the dangers of the anti-immigrant, anti-EU far right, which has spent years trying to shed its image as a racist, anti-Semitic movement.
“'Chez Nous' is targeted at people who are angry and is an attempt to represent them, with their difficulties and their sense of having been betrayed,” the film's Belgian director Lucas Belvaux told Telerama magazine.
“I want voters to understand exactly what they are supporting when they vote for the FN (Le Pen's National Front),” he added.
The film takes place in the sort of small town in northern France struggling with joblessness and the effects of globalisation that has become fertile ground for the FN.
Promising economic nationalism and a crackdown on crime and immigration, Le Pen has targeted the similar type of disgruntled, working-class white voters that propelled Donald Trump to the White House.
The film's lead role, played by Emilie Dequenne, is a single mother of two who is looking after her father, a communist-voting former metal worker.
“You just talked about a revolution. We're going to do it,” she tells him at one point.
Marketing material?
Polls currently show Le Pen, who took over the party from her father in 2011, winning the first round of the two-stage presidential vote in April with more than 25 percent.
But they also show her falling short of the 50 percent of votes needed to win the second-round runoff, when mainstream parties are expected to unite to keep her out.
But after the political shocks of Brexit and Trump in 2016, seasoned political observers caution against predictions.
“We should be delighted with this film because I think it's our best travelling salesman at the moment,” Le Pen's closest adviser Florian Philippot said on Monday.
He added that for him, the film revealed a total “contempt” for the lower classes.
It was a change of tactics from the start of the year when he called the film project “scandalous” and a clear attempt to influence the election.
Others in the party have come out fighting.
The mayor of Henin-Beaumont, an FN stronghold in northern France, sympathised with Le Pen on Twitter, saying she had been badly depicted in what looked to be “a genuine turkey of a film”.
READ ALSO: 'French First' – What 'President Marine Le Pen' has in mind for France Futile attacks?
France-based Belvaux told AFP that Le Pen was only “one of several sources of inspiration” for the blonde party boss in the film, played by left-wing star Catherine Jacob. But the two women bear a striking resemblance.
“The film doesn't instruct people how to vote,” Belvaux said after criticism that his film amounts to political campaigning.
It is a “survey of what the party is today, and 90 percent of what is said is true”, he added.
Le Pen, who was in the headlines again on Tuesday after refusing to wear a headscarf during a visit to Lebanon, is convinced that after the anti-establishment revolts in Britain and the United States, her time has come.
She has been helped recently by a scandal that has engulfed her conservative rival Francois Fillon, accused of falsely employing his wife as a parliamentary aide.
“2016 was the year the Anglo-Saxon world woke up. In 2017, I am sure, the people of continental Europe will wake up,” she said at a meeting of far-right parties in Germany in January.
In the “Anglo-Saxon world”, leading entertainers in the film, music and television industries in London and Los Angeles signed petitions and lobbied hard against Brexit and Trump — to no avail.
Hollywood, a bastion of the left, has had to face up to the impotence of its attacks on Trump — and which may have had the opposite effect to the one desired.
“We got cocky and became arrogant and we also became bullies,” actress Zoe Saldana, star of “Star Trek” and “Avatar”, told AFP last month.
“We were trying to single out a man for all these things he was doing wrong… and that created empathy in a big group of people in America that felt bad for him and that are believing in his promises,” she said.
By AFP's Thibauld Malterre and Adam Plowright