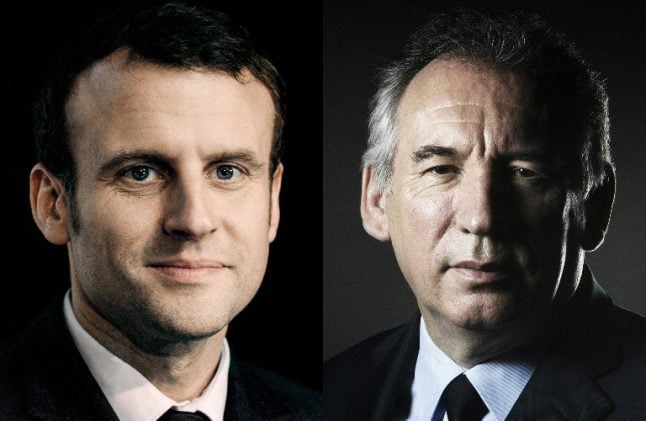 In a eagerly-awaited press conference on Wednesday afternoon, where Bayrou was expected by many to announce his own candidature for the French presidency, he instead came out in support of the maverick Macron and proposed they work together.

Bayrou, who had hinted at his own presidential run, announced he would not mount a rival bid to avoid splitting centrist votes to the benefit of far-right candidate Marine Le Pen, who he said poses a “major and immediate threat for our country and Europe”.

Macron immediately accepted the alliance, according to the Mayor of Lyon, “they met the week before and decided to make an alliance together.”

“France's democracy has “broken down,” warned Bayrou, offering the pact to prevent “the failure of France.”

“The danger is too great,” Bayrou told the press. “We have to change things, let’s unite our forces to achieve that.”

“Emmanuel Macron is brilliant, we could do great things together in this alliance,” he said.

Although Bayrou is only offering the alliance under conditions, Macron will receive an automatic boost by the fact the veteran politician has decided not to run.

Polls suggested Bayrou could have picked up around 6 percent of the first round vote on April 23rd, mostly from voters who presumably would have opted for fellow centrist Macron, making it harder for the 39-year-old former economy minister to make the crucial second round.
Macron is running on a ticket that is “neither left nor right” and has enjoyed a steady rise in the polls in recent weeks.
However after being the frontrunner at one point, he has slumped in recent days thanks partly to his statement that France's colonisation of Algeria was “a crime against humanity” and by stating that France's legion of anti-gay marriage protesters had been “humiliated” by François Hollande's legalisation of same sex marriage.
So the boost from Bayrou, who took 18.57 percent of the vote in the first round of 2007 election and 9.32 percent in 2012, comes at just the right time for Emmanuel Macron.
Marine Le Pen is widely expected to make the second round vote, but is then predicted to lose to either scandal-plagued François Fillon or Macron.
Macron's only hope of making the second round then is if he finishes ahead of Fillon, whose has seen a resurgence in the polls following the fake jobs scandal that surrounded his wife.
In his press conference on Wednesday Bayrou had strong words for Fillon.
“I am absolutely certain that French politics has fallen victim to practices that would not be accepted anywhere else,” he said.
“Francois Fillon's friends say, “it's not so bad, everyone does that”. Well, no, everyone does not do that,” Bayrou said, referring to Fillon having paid his wife hundreds of thousands of euros of public money to work as his parliamentary assistant.
Bayrou said he could not have joined forces with Fillon because of the conservative's plan to make sweeping cuts, including wiping out 500,000 civil servant posts.
“I couldn't makes an alliance with Fillon because his programme was dangerous,” said Bayrou.