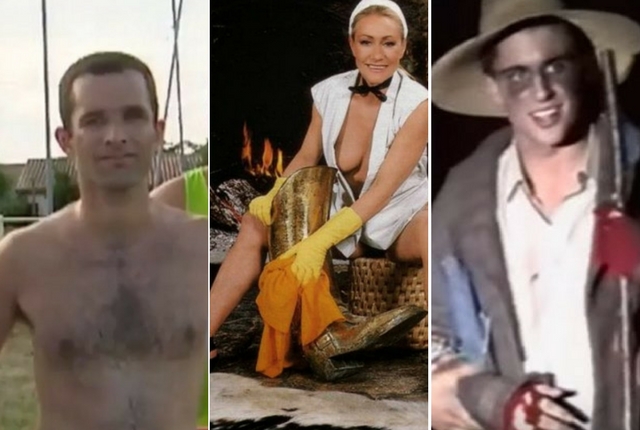 Politicians will do their best to hide them but they've all got a few interesting stories from their pasts or private lives.

And France's presidential candidates are no different.

Here are some need-to-know facts about the five runners vying for the top job in France.

He may be an advocate of strict law and order in his presidential campaign (until the recent fake jobs scandal ruined all that), but in his youth, Fillon was known as a bit of a rule breaker.

Young Fillon once threw teargas during a supervised study hour in school, earning himself a temporary exclusion from school, and he also lead a rebellion against a teacher, whom he apparently deemed incompetent, demanding he resign.

Later in life Fillon and his now famous Welsh spouse Penelope escaped death in a nightmare honeymoon in Spain. The then young couple spent their nuptials in hospital when their car fell into a ravine, according to a biography of the presidential candidate.

Also on his list of loves are cars, and a 17-year-old Fillon appeared as an extra in the 1971 cult film “Le Mans” starring Steve McQueen. Unfortunately for Fillon, he never actually made it into the final cut of the film.

The Les Républicians candidate had his moment however, when he appeared on France’s version of Top gear for the regular feature where a celebrity drives a lap in a “reasonably priced car”. He finished in 1 minute 41 seconds, placing him 4th of all the guests that season.

Growing up as the daughter of one of France’s most divisive politicians has its dangers, and when Marine Le Pen was eight a bomb exploded outside their family home in Paris, something she says shaped her personality.

Marine and her father have been known to fight like cats and dogs, but in 2014, her father’s Doberman actually killed one of Marine’s Bengalese cats. The incident apparently prompted Marine to move out of the family home soon after.

Marine wasn't actually meant to get this far. Her older sister Marie-Caroline was originally meant to take over the party, not her. “He brought her [Marie-Caroline] up to do that,” Jean-Marie’s second wife Jany Le Pen explained. “He sent her to Oxford. She spoke English, she was the most qualified”.

But then Marie-Caroline had an acrimonious split from her father both personally and politically.

Instead Marine became the National Front leader and earned herself a reputation as a party animal, and was nicknamed “la night-clubbeuse” by her peers in the party.

Marine's mother also gained a reputation, and it wasn't to Marine's liking.

Pierrette Le Pen appeared almost entirely naked in a 1987 Playboy issue after splitting from her father. She posed for the cover and in a series of photographs causing a huge scandal in the Le Pen clan.

According to an ex-Front National official, Marine was traumatised seeing the images, and never forgave her father for provoking the situation. Marine has four homes. She rents an apartment in the town of Hénin-Beaumont in the north of France, she’s the co-owner of the family’s Saint-Cloud mansion, as well as an old stable converted into an apartment and the family home in Morbihan, southern Brittany. Finally, she’s bought a house on credit in the Pyrénées with her partner Louis Ailot.

It’s well known that Macron is married to his former French teacher from school, but you may not have seen this moment in his school theatre club play, that was directed by his future wife Brigitte Trogneux. (Skip to 1:50)

Young Macron’s acting ambitions didn’t stop there. In one biography, he is said to have enrolled himself in acting classes in high school and even went to castings for films, one of which was alongside distinguished French actor Jean-Pierre Marielle, however he didn’t get the role.

According to schoolmates, Macron, the ex-Minister of the Economy, was terrible at maths and statistics. Literature was more his style and he used to write poems, as well as a book set in pre-Columbian America which he never published.

Commentators and Twitter users had a field day when they found out that the centrist independent candidate’s dog is called Figaro, which is also the name of a right-wing François Fillon supporting French newspaper (and a fictional character from the Barber of Seville). Coincidence?

The Socialist party candidate is famously discreet about his wife and refused to go on the recent French TV show “Ambition intime”, where public figures reveal their private lives.

After growing up in Brittany, his family moved to Dakar, the capital of Senegal when he was ten. Returning to high-school in France, he has said he was shocked by the racism he saw and so started getting involved with French anti-racism group SOS Racisme.

Among his unlikely interests are rap music (especially the group Suprême NTM), and boxing. He’s fascinated by Muhammad Ali and wants to box, he told Paris Match.

He’s also a sports fan, as shown in a video unearthed by Gala magazine, which reveals a young Hamon, seen topless at a football match (or possibly rugby, it's not quite clear). You may have known that the far-left candidate was once a journalist, but did you know he was an illustrator too?

Under the pseudonym “Moz” he drew cartoons for Catholic daily paper La Croix and a socialist federation newspaper in Jura, eastern France. Mélenchon gets good use out of his Metro pass, as he doesn’t own a driving licence. “I was never interested in cars,” he explained on the talk show “Face aux Francais”.

One site reports that Mélenchon, a Spanish speaker, was awarded a medal by the former Argentinian president Raul Alfonsin for his work meeting leftist leaders in the country.

He’s known for his sometimes adversarial style (as shown in the video below, where a Europe1 interview turns into a shouting match), but he may be a softy at heart.

Melenchon told Gala magazine that he would like to write a romantic novel, saying he finds “questions of fusion and of identity in love” to be “passionate”.