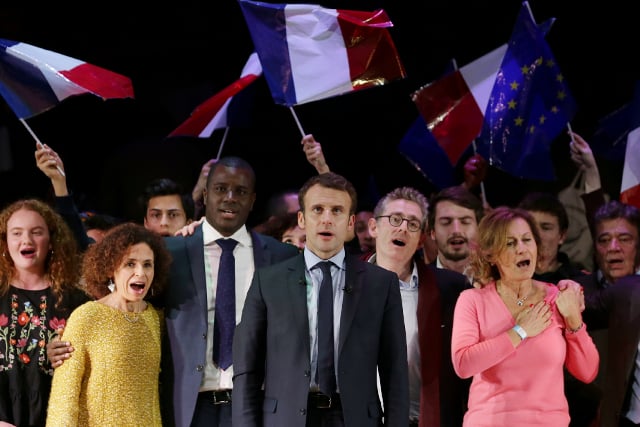 French presidential candidate Emmanuel Macron on Tuesday urged expats in London to bring their talents home to France,
following a meeting with Prime Minister Theresa May.

Addressing more than 2,000 French citizens and others at the Methodist Central Hall, opposite the Houses of Parliament, Macron said he wanted to convince them to return and “innovate, seek, teach”.

“I want (France) to be a country where we can do all this,” the centrist former economy minister said, addressing an audience including entrepreneurs and finance workers.

Britain is home to an estimated 300,000-plus French citizens, largely based in the capital.

“We must love success,” or risk French citizens looking elsewhere for opportunities, Macron said, referring to a “fear of failure” he sees in France.

The ex-investment banker also took the chance to joke about rival Francois Fillon, as a new poll showed Macron losing ground ahead of April's first round of the presidential election despite Fillon being mired in scandal over claims he gave his wife a lucrative fake parliamentary job.

Macron referred to the “money I earned myself” ahead of launching his political career. “I can assure you, it's me who earned it. I had a job, it seems awful,” he joked.

As well as business professionals, the audience included footballers Steve Mandanda and Yohan Cabaye, who play for the French national team and the English side Crystal Palace, Macron's campaign team told AFP.

Earlier on Tuesday Macron met with May, saying he wants London bankers and academics to move to France after Brexit.

“I want banks, talents, academics, researchers and so on. It will be part of my programme to be attractive for these kinds of people,” he said.

Opinion polls suggest Le Pen would win the first round of France's presidential election on April 23, but would lose in the run-off vote on May 7.

Macron had been the favourite to take her on, but a new Elabe survey published Tuesday suggests conservative Fillon has overtaken him again.