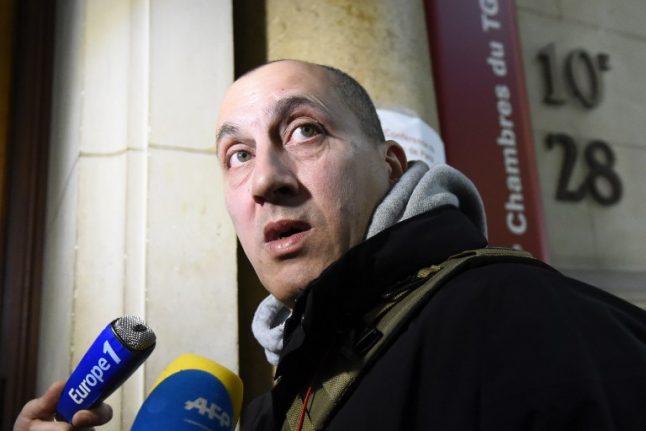 Vjeran Tomic in Paris. Photo: AFP
Vjeran Tomic (pictured below) and two accomplices were also jointly fined a whopping €104 million ($110 million) over the theft of the paintings by Henri Matisse, Pablo Picasso, Georges Braque, Fernand Leger and Amedeo Modigliani from the
Musee d'Art Moderne on the night of May 20, 2010.
The fine corresponds to the estimated value of the artworks, which are still missing.
A lawyer representing the City of Paris, which runs the museum, call their disappearance an “unspeakable” loss to humanity.
Tomic, a 49-year-old seasoned burglar of Croatian origin, admitted robbing the gallery, which is home to more than 8,000 works of 20th-century art.
On his arrest he told police he was asked to steal Leger's “Still Life with Candlestick” from 1922, and never imagined he would be able to grab four more.
Security lapses
The case revealed extraordinary security lapses at the museum in the ritzy 16th district, on the banks of the Seine.
The motion-detection alarms had been out of order for two months when Tomic, who staked out the building for six nights, slipped inside after using acid to dislodge a window pane.
After grabbing the Leger without creating a disturbance he went on a stealing spree, taking Picasso's cubist “Dove with Green Peas” from 1912 — alone worth an estimated €25 million — Matisse's “Pastoral” from 1905, Braque's “Olive Tree near Estaque” from 1906, and Modigliani's “Woman with a Fan” from 1919.
Three guards on duty failed to spot him. His silhouette popped up only briefly on a security camera.
The paintings were only found to be missing from their frames when the museum reopened the next day.
Jean-Michel Corvez, a 61-year-old antique dealer who admitted to ordering the theft of the Leger on behalf of an unnamed client, and Yonathan Birn, a 40-year-old watchmaker who admitted to hiding the paintings for a time, were given sentences of seven and six years respectively.
On top of their collective fine, the three men were given individual fines of between €150,000 and €200,000 each.
Corvez also had his home seized and was banned from dealing in antiques or art for five years.
'Bored with his bourgeois life'
During the trial Birn told the court he had dumped the paintings but the court expressed doubt over that claim, noting the lack of proof of their destruction.
An art lover, he had admitted to becoming enraptured with Modigliani's “Woman with a Fan”.
His lawyer had described him as an impressionable man, who was bored with his “nice little bourgeois life”.
Tomic, a master burglar, said he took five paintings because he “liked” them.
Athletically built and 1.90 metres (six foot 2 inches) tall, he had gained his nickname by clambering into posh Parisian apartments and museums to steal valuable gems and works of art.
He was spotted by a homeless man as he roamed around the museum in the days leading to the theft.
Police arrested him after receiving an anonymous tip and tracking his mobile phone.
There has been a spate of art thefts in Europe in recent years.
The most recent, in 2015, involved the theft of five paintings worth €25 million by renowned British artist Francis Bacon in Madrid.
Spanish police arrested seven people last year suspected of being involved in that theft.