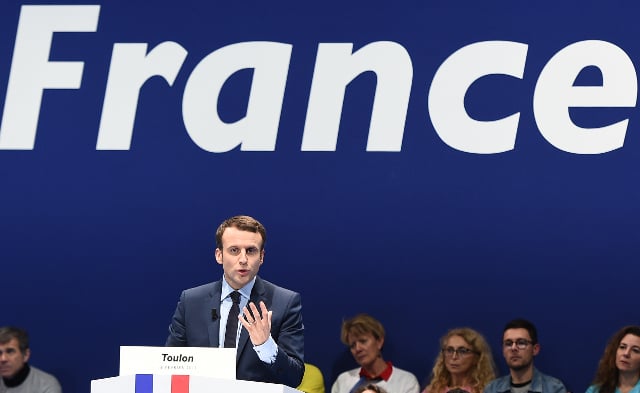 All photos: AFP
1. He is pro-Europe
During a particularly turbulent time for Europeans, Macron is the loudest pro-EU voice in France's election campaign, which is why he has caught the attention of British and other European citizens in France, most of whom tend to be pro-EU.
Indeed, when faced with the anti-EU, far-right Marine Le Pen and the rightwing, social conservative Francois Fillon who doesn't appear to be a big believer in the current European project either, Macron comes across as a saviour for those who still believe in the concept of an open Europe.
His campaign rallies are the only ones where the European Union flag is waved with both Le Pen and Fillon's supporters preferring the French tricolour.
His pro-EU stance is soothing relief for those Brits in France for whom Brexit still causes sleepless nights and its earned him some positive press in the pro-EU Anglo press. This headline below is from the Foreign Policy website, while The Guardian said a Macron victory would “give the EU a chance to save itself”. Philip Mold, a 59-year-old Brit living in the Gironde department in western France, says he has been an official “adherent” to Macron since April last year.
“He offers a new approach, a genuine enthusiasm for Europe and much more, if only Britain had a Macron, and how sad it is I will not have a vote on 2017,” he told The Local. 2. He's not Le Pen (or Fillon for that matter) or even Trump
Foreigners in France are naturally worried about the rise of the far right which means the prospect of Marine Le Pen becoming president.
Their worries appear genuine, not least because she's made it obvious she doesn't really like foreign migrants and secondly she has recently made it very clear that she will put French first and foreigners second.
For example she would force foreigners to work for two years in France before they could have all their health care costs covered.
You only have to trawl the message boards of groups of Brits living in France to see that many are worried about the double whammy of Brexit and a Le Pen victory.
Members of the Remain in France Together Facebook group, made up of anti-Brexit British citizens in France, are often quick to share their admiration for Macron, with a popular post last week offering directions for how to register as a supporter for Macron's party – En Marche!
“We may not be able to vote or attend marches in the UK, but we can offer our help to stop the march of the far right across Europe and I think Macron is our best hope,” said Shelagh Dolley, who said she received a warm welcome at a local committee meeting of Macron supporters.
While Fillon might have a British wife and be dubbed the French Maggie Thatcher there does not seem to be anywhere near the kind of support for him as there is for Macron, who for some is just “the least worst” of the main candidates.
“Out of the three (Le Pen, Fillon and Macron), I think there is only one who is anywhere near beneficial for us. I don’t like his policies particularly, but Macron seems the least worst of these three,” said Bob McNair on the RIFT group.
Socialist Party candidate Benoit Hamon barely seems to get a mention in message boards, perhaps a sign there is little belief he can trouble the three main candidates. (AFP)
3. And apart from being pro-Europe Macron said Brits in France are “very welcome” after a Brexit
A video where Macron said (in English) that he would be “pretty tough” on Brexit has naturally drawn praise from Brits in France, who are increasingly anxious about their futures.
“We have to preserve the rest of the European Union and not to convey the message that we can decide to leave without any consequences,” he said.
When he was asked if he would guarantee the rights of Brits living in France, he said:
“For sure, they are very welcome.”

Macron is eloquent, honest, progressive: a liberal and sincere voice for the pro-EU integration movement#EnMarche https://t.co/G0eEe5wlBx

His comments prompted positive feedback on the Remain in France Together Facebook group.
Commenters praised Macron's integrity, with others noting that he seemed “clever” and “genuine”.
4. He has also made a plea to disillusioned Americans
In a video from earlier this month Macron appealed to climate scientists and engineers specializing in renewable energy who might be disillusioned at the election of Donald Trump to leave the US and move to France.

“I do know how your new President now has decided to jeopardise your budget, your initiatives, as he is extremely sceptical about climate change,” he said.
“I have no doubt about climate change and how committed we have to be regarding this issue.”
“We like innovation, we want innovative people, we want people working on climate change, energy, renewables and new technologies.”
“France is your nation. Thanks.”
The video went down well with many across the Atlantic.
“If Macron manages to win, I say we all bail to France. Not just the scientists,” wrote one Twitter user.
“I'm ready!! Where do I sign??” wrote another. 5. He is fresh and new
Macron is in his thirties (but only just at 39) – in contrast to his main rivals Fillon, who is 62-years-old and Le Pen, who is 48, but gives the impression she has been around for decades.
While Macron's youth, inexperience and independence from the traditional left and right may evoke suspicion in many French voters, who are more used to their presidential candidates having been around the block a few times, his freshness is perhaps more appealing to foreigners who are more used to political renewal. Matt Volsky, a Californian supporter of Macron living in Paris, says the politician's energy rivals that of former US president Barack Obama.
“He seems young, energetic, and intelligent,” he tells The Local.
“And it's refreshing to see politicians who are more forward thinking.”
6. He speaks English (and very well)
This is the obvious one. Macron speaks English and that means we can all understand him.
And let's face it it's astonishingly rare for a French politician to speak such good English – some French politicians (past and present) have been awful at best, as the video below shows.
Macron, however, not only speaks English well, but he has spoken it for full press seminars, interviews, and even in tweets.
For the record, presidential candidate Francois Fillon also apparently speaks good English (he's married to a Welsh woman after all). The other front runner, Marine Le Pen, refuses to speak English in public (though perhaps she can).
And sure, Macron has an unusual, almost German accent, but it's a ten out of ten compared to the rest.
7. He wants to bring France into the 21st century
And lastly, many foreigners in France like Macron because he dares to offer something new.
Sure, many foreigners love France for exactly what it is, but many wouldn't deny that France can be a little… shall we say, behind the times or stuck in its ways.
But Macron is promising to change all that by dragging France into the 21st century. Whether he can is a different question.
READ ALSO: This is what Macron plans for France
His Macron law, introduced when he was the Economy Minister, hardly brought about a sea change, but it did show his willingness to open up areas of the economy.
His reform of Sunday shopping laws will have gone down well with those foreigners who hate the fact everything closes on a Sunday in France. “The idea that a new independently-minded Minister could challenge some of the blockages in the French economy instantly enthralled me,” Brit in France Philip Mold told The Local.

And it's also enthralled Britain's Financial Times newspaper who pointed out that Macron was France's “only candidate offering economic optimism” in their editorial titled “French economy needs reform not revolution”.