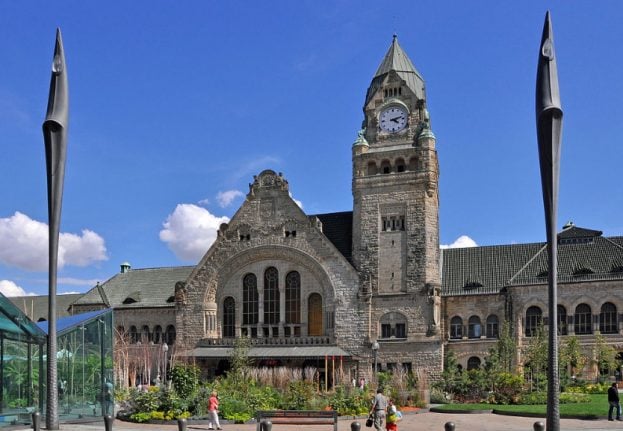 Photo: Mark Ryckaert/WikiCommons
The railway station in Metz, in eastern France, has been voted as the most beautiful train station in France.
The poll was carried out by train operator SNCF via its Gares & Connexion Facebook page in a knock-out tournament based on user's votes.
Metz knocked out La Rochelle's station in the final round of the head-to-head on Monday, racking up 19,000 votes against 7,000 for La Rochelle. The Metz station was built in 1908 and was registered as a historic monument back in 1975.
The station itself was built by a German, Jürgen Kröger, and features a 40-metre clock tower, boasts stunning facades, and even has bookstore that used to be the former station restaurant.
Practically, the station connects via TGV to Paris in about 80 minutes, and offers connection as far afield as Zurich, Luxembourg, and Munich. In fact, there are a few connections to Moscow if you get your timing right.
But you didn't come here to read about it – here's a closer look at the “most beautiful railway station in France”. But what about the other contenders?
Here's a look at the second-place getter, La Rochelle. Photo: WikiCommons
The top four was rounded out by Gare de Tours and the Gare de Lyon St-Exupéry, both in central France, and pictured respectively below.
Gare du Nord in Paris did not make the top four, you won't be surprised to read. Gare de Lyon St-ExupéryPhoto: Bicycle Bob/Flickr
But what for you is the most beautiful train station in France?

PARTNER CONTENT
Enjoy a taste of paradise in Malta
Url copied to clipboard!