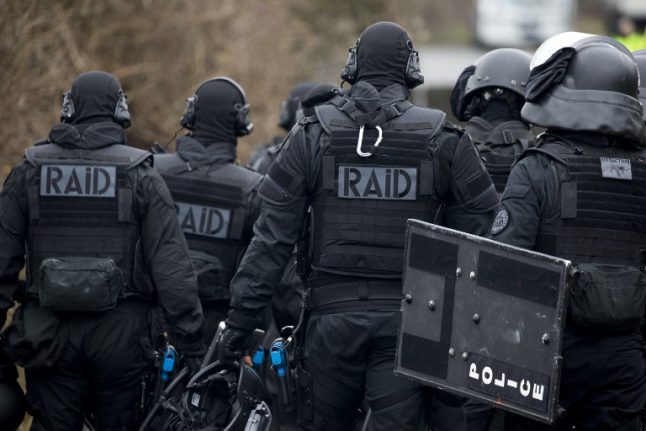 Photo: AFP
The men were arrested in the central city of Clermont-Ferrand, Marseille in the south, and in the Paris region, reported BFM TV.
“The suspects had a plan and it was sufficiently advanced that that counter-terror police decided to intervene,” a source told the channel.
A bomb squad was called to the home of one of the suspects in Clermont-Ferrand, reported Le Figaro newspaper.
The raids were ordered by anti-terrorism prosecutors in Paris, a judicial source told AFP.
Little else remains known about the suspects at this point, or indeed their terror plot.

However, their arrests come soon after similar anti-terror raids in southern France.
Earlier this month, French police arrested four people in Montpellier, including a teenage girl, who the interior minister said were plotting an imminent terror attack in Paris.
Bomb-making material was found at one of their addresses.
France remains on high alert after several high profile terror attacks in recent years.
Tourist sites in Paris have been forced to up security this month after an Egyptian man shouting Allahu Akbar attacked French soldiers patrolling outside the world famous Louvre museum in Paris.
Last September also saw a botched attempt by three female jihadists to blow up a car outside the Notre Dame Cathedral in Paris.
Tuesday's arrests also come just months after seven were arrested by counter-terror police in Strasbourg and Marseille over a separate terror plot.
It is believed that terror plot was aimed at carrying out an attack at Disneyland Paris.
Interior Minister Bruno Le Roux said earlier this month that French authorities have foiled “no fewer than 13 plots involving more than 30 individuals”, including women and minors, since the Bastille Day truck massacre in the Riviera city of Nice that claimed 86 lives.