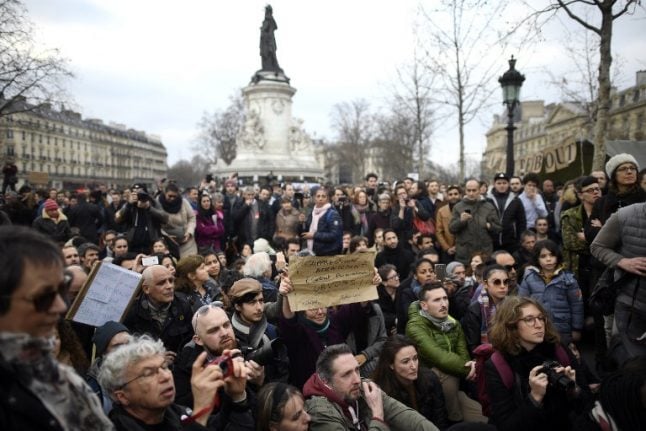 Photo: AFP
“To jail with the corrupt” and “Down with the privileged” read placards brandished on the Place de la Republique, the vast square in central Paris which has long hosted huge protests.
Conservative candidate Fillon has been mired in scandal since last month when it emerged that his wife netted at least €680,000 ($720,000) for a suspected fake job as a parliamentary assistant over a period spanning 15 years.
Two of Fillon's children were also put on the parliamentary payroll for brief periods.
Far-right leader Le Pen, for her part, is accused by the European Parliament of defrauding it of nearly €340,000 paid to two parliamentary aides.
“They have no right to lecture us on morality,” said Patrice Roblet, a 66-year-old pensioner from the northern suburb of Val d'Oise.
“They pass their laws and their privileges, in fact we haven't progressed since the Revolution” he said — referring to the uprising from 1789 which established France as a republic — and holding a placard reading “Abolish privileges and the monarchy”. In Toulouse some 200 people banged pots and pans — a reference to a slang word for political scandals — and shouted “No to corruption”.
“Francois give us back the million”, one sign read.
Other protests were held in Lyon, Angers, Lille and elsewhere, with more planned for next Sunday with elections looming in two months.
Fillon, who has denied the “fake jobs” allegations, said Saturday that he would press ahead with his presidential bid even if investigators charge him over the affair.
Fillon, 62, had earlier pledged to drop out of the race if charged.
He acknowledged that his run had become “difficult”, with hecklers often massing at his campaign stops across France. The claims have taken a heavy toll on his standings in the polls, with the latest Ipsos Sopra Steria survey of voter intentions putting him in third place in the first round of voting on April 23, with 18.5 percent.
Le Pen's standing has not suffered from the scandal, as she remains in first place for the first round, with 26 percent of voter intentions.
A run-off between the top two candidates will take place on May 7th, with Le Pen so far not expected to prevail.
Meanwhile centrist candidate Emmanuel Macron was second in the Ipsos poll at 23 percent for the first round, and Socialist candidate Benoit Hamon stood at 14.5 percent.