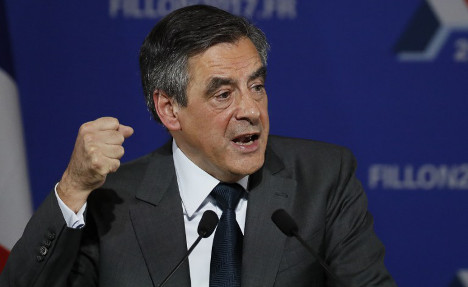 “The closer we get to the presidential election, the more outrageous it would be to deprive the right and the centre of a candidate,” Fillon told French daily Le Figaro in an interview.

Fillon, 62, had earlier pledged to drop out of the race if charged in the inquiry, now in its third week.

He reiterated his claim that a smear campaign was being orchestrated against him, without naming who might be behind it.

“I don't know, but I see who is profiting from it… A left that is in an inextricable situation with a discredited president, a fractured majority, and an illusionist for a candidate,” he said.

“The only obstacle in their efforts to stay alive is me.”

Le Canard Enchaine newspaper has reported that Fillon used public funds to pay his wife Penelope at least 680,000 euros ($720,000) over some 15 years as a parliamentary aide.

But she is accused of having barely worked for the salary. Two of Fillon's children were also put on the parliamentary payroll for brief periods.

Fillon acknowledged that his run had become “difficult”, with hecklers often massing at his campaign stops across France.

The claims have taken a heavy toll on his standings in the polls, with the latest Ipsos Sopra Steria survey of voter intentions putting him in third place in the first round of voting in April, with 18.5 percent.